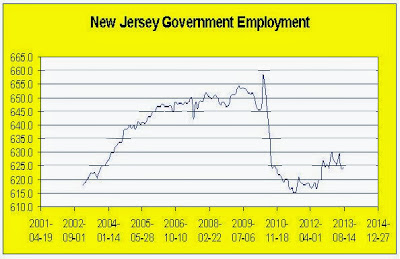 Caitlin MacNeal must have watched Chris Christie yesterday too:

New Jersey Gov. Chris Christie (R) went on four morning talk shows on Sunday to tout his sweeping re-election victory as a model for the Republican Party nationwide, but the prospective 2016 presidential contender carefully refrained from staking a position on contentious issues such as immigration reform and deliberations over Iran's nuclear program. Throughout the morning, Christie left the door open for a 2016 presidential run while making it clear that governing New Jersey is his focus right now.

Christie has also been talking tough about doing his job and being honest with citizens. I’m happy to focus on New Jersey issues but first let me express my only frustration ever with the excellent posts from Bill McBride who suggests state & local austerity is over:

State and local government purchases have inched up for the past two quarters but only after a sustained period of decline. To be fair to Bill – his graph of government employment dates back for over a decade showing how deep the state and local government austerity has been. Governor Christie campaigned very dishonestly on the claim that he balanced the budget and had incredible employment growth. In truth, the New Jersey employment record sort of tracked the national record. At the end of 2007, employment was 4.3 million but dropped to 4.1 million by mid-2009. Its recovery has brought this figure only back to 4.2 million as of August 2013. In other words, employment is still 2.3% shy of where it was before the Great Recession. Nationally, employment is only 1.1% shy of where it was before the Great Recession. I say “only” here but you might protest that employment would have had to grow by almost 5.7% in order to get back to the old employment to population ratio. Christie was asked about this point from the Wall Street Journal:

Among the headwinds for the Republican as he sets an agenda for 2014: a state unemployment rate of 8.5% in August, compared with 7.3% nationally (and among the 10 highest of all states); a slower recovery from the recession compared with the nation; and a budget with a slimmer surplus than those in most of the rest of the country.

One of his responses was that New Jersey has created 144,000 new private sector jobs. Of course, that figure used as its starting point the bottom of the employment decline. But then how can I claim that total employment rose by only 100,000 new jobs since the bottom? Could it be that government employment was reduced by around 40,000 during Christie’s tenure in office? In other words, Christie sees his job as fiscal austerity which only makes the employment situation worse. And yet he brags about how he has somehow improved New Jersey’s employment situation? I guess the press thinks this is honest because Christie shouts when he says this nonsense.
Posted by ProGrowthLiberal at 11:54 AM

"I guess the press thinks this is honest because Christie shouts when he says this nonsense."

I love your sarcasm. The truth is that press is very lazy and focuses much more on image and style than substance and results.

Also, NJ's unemployment rate is higher than that of nieghboring states. One would think that the Wall Street boom, in particular, would be beneficial to northern New Jersey.