The Jobless Situation: getting better, but still quite bad.

Measured using official statistics, the job situation in the U.S. is getting better, but it's still pretty bad. This is especially true for young people and members of "minority" groups, but the problem is serious for the whole market too, where the availability of jobs is measured.

The statistics in the graph show the number of unemployed workers relative to the number of available job openings (both as measured by the Bureau of Labor Statistics). As shown by the dark black line with diamonds, the ratio of the official (U3) unemployment rate to the job vacancy rate has fallen relative to its peak at the end of the official recession in the middle of 2009. But this ratio is still high: there are more than two unemployed workers for each job that's available. This is about the same as the worst of the George W. Bush years (even before the Bush/Obama recession), when the availability of jobs was much more anemic than most people would like. This "worst" is shown by the black horizontal dashed line. The current ratio is clearly much worse than during the "good old days" of the Clinton years, when there was about one job for each unemployed worker seeking one. (That's when the BLS started collecting these data.)

Most people know that if an unemployed worker stops looking for a job, he or she stops being counted as officially "unemployed" and isn't part of the U3 unemployment rate. Luckily, the U.S. Bureau of Labor Statistics also calculates the U6 rate, which takes these folks -- including workers who quit searching for a job because the situation is so discouraging -- into account. The ratio of U6 to the number of job openings is shown by the purple line with the cross-marks. Looking at changes over time, the story is pretty much the same as for U3. One difference is that U.S. labor markets still haven't attained a low level that's comparable to the worst of he George W. Bush years (before the recession) which is shown by the horizontal purple dashed line. It's also hardly close to the ratio achieved at the end of Clinton years. Currently, using U6, there are about 5 unemployed workers for each vacancy counted (compared to 1.8 at the beginning of the graph).

The U.S. labor markets show a severe job shortage (with job openings being rarer than job seekers). This means that when the cut-off of unemployment insurance benefits to the long-term unemployed that's happening now shoves them to accept any damn job available (even if they're very overqualified), it will simply take jobs away from those with fewer qualifications. There will be little or no fall in unemployment as the desperate long-term unemployed shove those with short job tenure out of their jobs. (The "long-term unemployed" have been looking for jobs for more than one half of a year. Currently they represent about 37% of the unemployed labor force and about 2.6% of the total labor force.)
-- Jim Devine 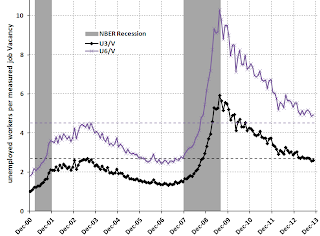 Posted by Econoclast at 7:16 PM