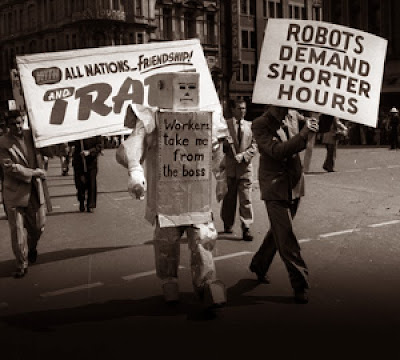 "You don't need a weatherman to know which way the wind blows."

There are some facts that no amount of regression analysis can annul. For example, the following sentence appears in a report on the "Role of governments and social partners in keeping older workers in the labour market" from the so-called European Foundation for the Improvement of Living and Working Conditions:


Perceptions that early exit of older workers should be supported to help generate jobs for young people, linked to a view of the existence of a fixed supply of available jobs (the so-called 'lump of labour' fallacy), have been discredited (see Walker, 2000).

I, Sandwichman, am AKA the "Walker, 2000" cited above. And here is a sequel from the International Journal of Discrimination and the Law:


There is also a misconception that if older workers remain in employment, there are fewer jobs for younger people (Bisom-Rapp and Sargeant, 2013); which is often referred to as the ‘‘lump of labor fallacy’’ (European Foundation for the Improvement of Living and Working Conditions, 2013: 8; OECD, 2011: 76; Walker, 2000).

Zhang and Zhao cite Walker, 2007 in their paper on "The Relationship between Elderly Employment and Youth Employment: Evidence from China," as do Banks, Blundell, Bozio, and Emmerson in "Releasing Jobs for the Young? Early Retirement and Youth Unemployment in the United Kingdom." Only the latter authors, however, present evidence of actually having read the article by Walker they cited, "Walker (2007) expresses a sceptical view of the idea that economists have been able to prove the 'lump-of-labor' to be a fallacy indeed." Indeed. Thank you, Banks, Blundell, Bozio and Emmerson!

In a category all its own was the 2008 IMF working paper by Jousten, Lefèbvre, Perelman and Pestieau, which, although they didn't explicitly cite "Walker, 2005 (draft)", somehow managed to replicate almost verbatim two complete sentences of my draft without "any recollection of reading your article during the course of our research." A coincidence, no doubt. What are the odds?

The long and the short of it is: the Sandwichman has become, by way of citation (five, if you count plagiarism as de facto citation), somewhat of an authority on the relationship between retirement and youth employment. Also somewhat of a witness on standards of scholarship. But... econometrics?

As Bob Dylan said, or sang, "you don't need a weatherman," and certainly you don't need an econometrics textbook to know when someone's "model specification" blatantly violates ordinary common sense. But it can't hurt:


3. Dropping a variable(s) and specification bias. When faced with severe multicollinearity, one of the "simplest" things to do is to drop one of the collinear variables. Thus, in our consumption-income-wealth illustration, when we drop the wealth variable, we obtain regression (9.5.4), which shows that whereas in the original model the income variable was statistically insignificant, it is now "highly" significant.

From the preceding discussion, it is clear that dropping a variable from the model to alleviate the problem of multicollinearity may lead to the specification bias. Hence the remedy may be worse than the disease in some situations because while multicollinearity may prevent effective estimation of the parameters of the model, omitting a variable may seriously mislead us as to the true values of the parameters. (Gujarati, Basic Econometrics)

Note the phrase in the second paragraph, "if economic theory says..." This may lead even the avowed non-econometrician to conclude that omitting or not omitting a variable is a decision that should be guided by -- or at least in some way constrained by -- economic theory.

What theory? In the case of the retirement/youth employment literature -- of which the Sandwichman is an acknowledged authority (see above) -- the relevant theory would appear to be "the theory that the 'theory' of the lump of labor is a fallacy." I say "would appear" because such is the only explicit economic theory (loosely speaking) that appears in the articles' discussions.

It's an odd theory that boils down to "the amount of work is not fixed." What possible refinement could regression analysis add to the obvious conclusion, that the supply of available jobs is not "fixed", one could readily draw from a most cursory glance at the unembellished time-series data itself?

Without putting too fine a point on it, something BIG pushes youth unemployment and the employment of older people in opposite directions. Even IF there were an association between retirement and youth employment, it stands to reason it would be SMALL in magnitude compared to the BIG thing that drives them apart. One doesn't have to be a weatherman, an econometrician or a rocket scientist to remain unsurprised when a relatively minor disturbance doesn't register as "statistically significant" in a regression analysis -- omitted variable or no omitted variable.

So what is really happening here? Why is this regression analysis elephant being belabored to give birth to this non-significant statistical mouse? It's about "keeping older workers in the labour market." Because, pensions. Or, to put it less delicately, it is about "improving living and working conditions" by cutting pensions. It is kind of hard to explain how taking things away from people will make them better off, which explains why one needs to do "regression analysis" that doesn't conform to the principles of Basic Econometrics.
Posted by Sandwichman at 5:52 PM