"Traditionally, it is a fallacy of the economically naïve left -- for example, four years ago France's Socialist government tried to create more jobs by reducing the length of the workweek."


Well, I hadn't looked at this data for a while; and where we are now is quite stunning: 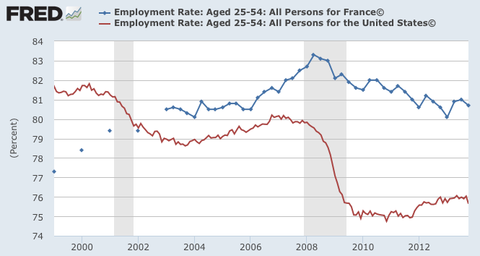 "Since the late 1990s we have completely traded places: prime-age French adults are now much more likely than their US counterparts to have jobs.

"Strange how amid the incessant bad-mouthing of French performance this fact never gets mentioned."

Now that you've mentioned this fact, Paul, how about revisiting the cogency of the lump-of-labor fallacy claim?


"Economists call it the "lump of labor fallacy." It's the idea that there is a fixed amount of work to be done in the world, so any increase in the amount each worker can produce reduces the number of available jobs. (A famous example: those dire warnings in the 1950's that automation would lead to mass unemployment.) As the derisive name suggests, it's an idea economists view with contempt, yet the fallacy makes a comeback whenever the economy is sluggish."