Stinting and saving... without stint or shirk!

'Tis work, work, work, without stint or shirk.
Till the world of his wares is full;
This worker, I trow, we all of us know,
And his name it is John Bull.

"Oh, then," cried the lad, "where's the good, I should like to know, of going through years of hard work, and stinting and saving, in order to get rich, if it's possible to make one's fortune in an instant, as you say." 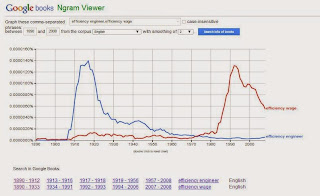 The "Ngram" chart above shows the frequency of occurrence, in books published between 1890 and 2008, of the terms "efficiency engineer" and "efficiency wage." The blue hump represents the reception of Frederick Taylor's Scientific Management. The red hump marks the ascendency of New Keynesian microfoundations.

An early occurrence of "efficiency wage" appears in a 1912 American Economic Review report of a roundtable discussion of Scientific Management at the 24th annual meeting of the American Economic Association. That discussion also contains the following edifying remarks by one William Kent, esq.:


William Kent: Mr. Tobin has told us of the case related by Mr. Taylor where the work formerly done by 600 shovelers and other laborers with average wages of $1.15 per day was, after scientific management had been applied to it, accomplished by 140 men whose average earnings were $1.88 per day. Mr. Tobin says that what interests him the most is what became of the 460 men who were displaced. Mr. Taylor accounted for some of them by saying they got jobs for which they were better adapted than for shoveling, at higher wages, in the same works, but he had not kept track of the rest of them.

It is creditable to Mr. Tobin's sympathetic heart that he thinks of the 460 men who were thrown out of a job, but if he thinks they long remained without jobs and that they were sufferers in the long run, he is infected by the fallacy commonly held by the unthinking that the amount of work to be done in the world is a definite and limited amount, and that if either by the use of machinery or by improvement in the method one man is enabled to do the work formerly done by two men, then one of the men is thrown out of work and he and his family are permanently injured.

This fallacy is referred to by Mr. Taylor in his book on Scientific Management, page 13, in the following words. "The great majority of workmen still believe that if they were to work at their best speed they would be doing a great injustice to the whole trade by throwing a lot of men out of work; and yet the history of the development of each trade shows that each improvement, whether it be the invention of a new machine or the introduction of a better method, which results in increasing the productive capacity of the men in the trade and cheapening the costs, instead of throwing men out of work, makes in the end work for more men."

The persistence of this fallacy of the workmen for the past 150 years, ever since the power-driven spinning and weaving machinery began to displace the old spinning wheel and hand loom, and the hand workmen destroyed the machinery and set fire to the mills, is based upon one of the best traits of human nature, sympathy for one's fellow man. Sympathy is one of the noblest emotions, but it is apt to exaggerate visible evils and be pessimistic. It says, "There is a poor workman thrown out of a job, the bread is taken out of his mouth, and he and his family are left to starve." It has no use for unemotional history, statistics, logic, and common sense, which all tend to the more optimistic view, that whenever a machine or a method of operation causes a piece of work to be done by fewer men, throwing some men out of employment, the money saved by reducing the cost of the work constitutes a fund which does not remain idle in the bank, but is used to give other employment to the same or to other men.

It is an axiom among men that have given thought to the subject that the work to be done in the world is not limited except by the facilities for doing it, and by the money available for paying for it. If the Bethlehem Steel Company saved $75,000 a year by throwing a large number of shovelers out of a job, it had that much more money to spend in other departments. Just as much ore was shoveled as before, and the $75,000 went into paying labor to add to the world's store of machinery or other desirable products.

In "The Causes and Cures of Unemployment in the Great Depression," Richard J. Jensen (1989) argued that hard core unemployment during the depression could be attributed to "efficiency wage" policies widely adopted by employers. Curiously, Jensen, an historian, made no reference to Taylor or Scientific Management in his article. In his analysis, Jensen relied heavily on the hypothesis that unemployment serves as a "worker discipline device" to discourage shirking:


A second dimension of efficiency wages involved shirking and stints. Some workers (some of the time) have an inner drive to work hard; most workers (most of the time) are willing to coast a little. Furthermore, shop-floor culture in the United States (as opposed to, say, Japan) encouraged peer group pressure against anyone who tried to work too hard. Close supervision to monitor output was expensive and was, in any case, keenly resented by good workers. It was better to select workers who were less inclined to shirk by offering high wages and to use a trial work period to screen out any shirkers who slipped through. Spot checks to identify and fire shirkers made loafing expensive for the workers; the higher the wage, the greater the possible loss.

Closely related to shirking was the problem of the stint. A group of workers would develop a standard rate of performance -- a stint -- and would harass shop mates who surpassed it. When management tried to increase the stint, workers denounced it as a "speedup" and threatened to strike. But the stint, and the perception of speedup, were relative and psychological. By careful selection, it was possible to find those workers with higher stint levels and to create groups that naturally produced more -- working faster and with less waste -- than groups held back by workers with lower stint levels. Every employer wanted high-stint workers, and so had to pay more to hire and retain them. Efficiency wages and careful hiring policies allowed firms to select workers who demonstrated higher stint rates -- who worked harder. Firms which gained a reputation for high wages and hard work, soon attracted and kept workers who felt comfortable with such a regime. Workers without the characteristics desired by management were not hired (except by mistake -- and then quickly fired). The rising real wages are explained by efficiency wage models only if productivity increased; otherwise, management would be making a huge mistake in paying more wages but getting no more output.

Frederick Taylor called this alleged standard rate of performance "systematic soldiering," which he attributed, as Mr. Kent cited above, to the fallacious belief "that if they were to work at their best speed they would be doing a great injustice to the whole trade by throwing a lot of men out of work." Professor Jensen and Mr. Kent can't both be right. But they can both be wrong. Furthermore, the source of their error is endemic to the cult of economics. It arises from a facile, ambivalent usage of ambiguous terminology to mean one thing or its opposite depending on who is acting and who benefits.

The key term here is "stint." According to the dictionary, there doesn't appear to be an etymological connection between stint and abstinence. But -- just as Nassau Senior substituted "for the word 'capital,' considered as an instrument of production, the word 'abstinence'" -- there is no loss in meaning when we substitute the phrase, 'stinting and saving' for Nassau's word, 'abstinence.'

What is it about the action of stinting/abstinence that makes it praiseworthy when conducted by capitalists and contemptible when performed by workers? For the answer, it might be useful to consider the role of stinting in sustaining the traditional commons. In Common as Air: Revolution, art and ownership, Lewis Hyde explained that:


A true commons is a stinted thing; what Hardin described [in "The Tragedy of the Commons"] is not a commons at all but what is nowadays called an unmanaged common-pool resource.

It should be noted, too, that as the commons were stinted, so was the market in goods (especially in grain). Markets could not operate without regard for the provisioning of commoners and the poor. Farmers, for example, were obliged to bring grain to market rather than sell it in the field to wholesalers, and markets themselves were fenced, as it were, so that speculators couldn't outbid the poor. A description of "the orderly regulation of Preston market" dated 1795 reads:


The weekly markets... are extremely well-regulated.... None but the town's-people are permitted to buy during the first hour, which is from eight to nine in the morning: at nine others may purchase, but nothing unsold must be withdrawn from the market till one o'clock, fish excepted....

In another town, "hucksters, higlers, and retailers" were excluded from eight in the morning until noon....

As with the constraints on the commons, markets were stinted for social and moral ends. No one was left to follow his or her own ends without regard for the group.

Stepping back from the temptation to romanticize the commons, it may be observed that the regulations Hyde cites -- however social and moral their ends may be -- favored "insiders" over "outsiders." The double standard exercised by economists doesn't represent anything new. It merely replaces one set of insiders and outsiders with another, thereby transforming "hucksters and higlers" into entrepreneurs and investors.

In The Anti-Capitalist Mentality, Ludwig von Mises carried the apotheosis of hucksterism and higgling to an outlandish extreme, crediting what he termed "the three progressive classes" of savers, inventors and entrepreneurs with sole responsibility for driving social evolution from savage cave dwellers to modern industry. In von Mises's account, as in the Polish joke, it is not the capitalists who exploit the workers but the other way around. It is "the common man", "the rest of mankind" who enjoy most of the fruits of the savers', technologists' and entrepreneurs' endeavors even though "they did not contribute anything" to the achievement of economic progress.
Posted by Sandwichman at 6:41 PM