No robotization without representation!

Luddites weren't wrong about losing their jobs, they were just wrong about the economy losing jobs in aggregate. -- Dietrich Vollrath

Dietrich Vollrath wasn't wrong about the Luddites losing their jobs, he was just wrong about them having any opinion whatsoever about "the economy losing jobs in aggregate."

Not only did the Luddites have absolutely nothing to say about such statistical aggregates and macroeconomic concepts, they were equally reticent on matters of quantum physics, Freudian psychoanalysis and the theory of anthropogenic climate change.

In short, not only did the Luddites not travel back in time to torch John Kay's house in 1753, they also failed to express any views on concepts that didn't appear even in rarefied scholarly discourse until the next century.

So why does a laughably anachronistic fable about an alleged Luddite error have such enduring appeal to economists in the twenty-first century? I've been asking that question for twenty years now. I'm pretty sure the answer is important. I doubt that an explanation will have any effect on endless repetition of the fable. Economist want to believe in the fable. Their paychecks depend on it.

One doesn't have to probe deep into the archives to come up with a credible historical account of the Luddite incidents. A good start for beginners would be the overview presented in a seminar paper, The Aims of Luddism: An Historiographic View, for the 2002 NEH seminar on Aspects of the Industrial Revolution in Britain:


Though the character of the attacks differed from region to region, most historians see enough similarities in the tactics and aims of these groups to categorize them under the same rubric. Most importantly, all scholars agree that the Luddites were not anti-technology. This is, of course, counter to the current popular perception of their actions; the term Luddite is used nowadays to denote someone who stubbornly refuses to use new methods and ideas, such as computers. The Luddites were not against machines per se, but against the threat to their livelihoods that some machines posed.

Maybe "all scholars agree" is a bit strong. But you get the drift.

One of the passages from a Luddite document frequently cited by historians to dispute the anti-technology platitude referred specifically to Parliament passing "an Act to put down all Machinery hurtful to Commonality." Commonality is a word, to be sure, but commonalty (without the 'i') was a much more common and significant spelling up until some time after the middle of the twentieth century. Attending to the more usual variant yields a poignant document, Major John Cartwright's radical reform pamphlet, The Legislative Rights of the Commonalty Vindicated or Take Your Choice, the second edition of which was published in 1777: 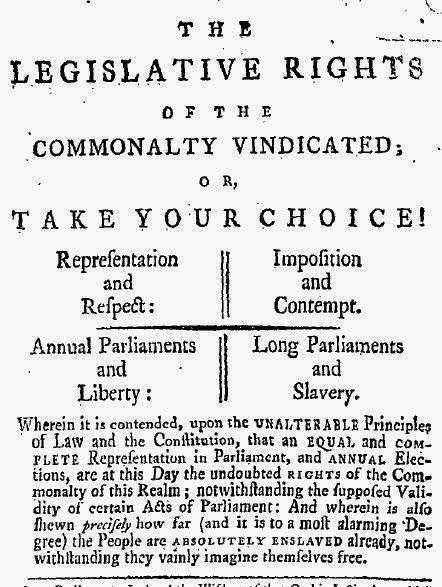 This is not to suggest that the Luddites were followers of Cartwright, although government officials subsequently imagined or exaggerated links between radicals and rioters. The latter suspicions were the subject of a 1948 article, "Luddism, Hampden Clubs, and Trade Unions in Leicestershire, 1816-17." According to its author, Patterson, several apprehended members of a Luddite gang "tried unavailingly to save their necks by fabricating tales of the complicity of Major Cartwright, Sir Francis Burdett and Gravener Henson (the leader of the Nottinghamshire hosiery workers) in insurrectionary plots."

Who then was this "commonalty" whose legislative rights were vindicated by Cartwright's pamphlet?

Cartwright's radical doctrine ("taken from the plain law of nature, from Scripture and the obvious dictates of common sense...") was that "every individual of the commonalty hath a common and equal right with his fellow-citizens to vote in all elections for the House of Commons." Horrors! Americans who remember their high school civics may detect a family resemblance between Cartwright's argument and the slogan of the anti-Stamp Act rioters of 1765, "No taxation without representation."

In his pamphlet, Cartwright directly cites "taxation without representation" and equates it with tyranny. From the perspective of tradesmen, non-enforcement and repeal of long-standing protective legislation would have same the effect, financially, as taxation. One of the core grievances of the Nottingham stocking-frame weavers was suspension and ultimately repeal of the Elizabethan law requiring seven years apprenticeship to qualify for the trade.

But commonality was and is also a word. What is commonality? Or what was it? From mid-nineteenth century comes a discussion of what commonality is by "Terrigenous," an advocate of "the people's right to land.":


Simply that though each individual has a natural right to inherit the earth as a co-partner in the universal inheritance, no individual has, or can have, a right to absolute ownership over particular spots of earth! That is Commonality in Land—public, general, national property, for ever!

What distinguishes commonality from commonalty may be more nuance and perspective than substance. Faithful representation of the common people might well legislate common property in land. Capitalist "democracy" thus must always be hedged against the possibility of popular rule. The Luddite fable is a crucial part of that hedge, separating the abstract notion of 'legitimate' political democracy from the allegedly economically fallacious, and thus 'illegitimate,' striving for industrial democracy.

Economists aren't just wrong when they invoke the hoary Luddite fable (or its ubiquitous lump-of-labor offshoot). They are disingenuous and deluded. They imagine themselves pontificating profoundly about efficiency and productivity when all they are doing is reciting a rote apology for privilege.

Take your choice: representation and respect or imposition and contempt.

(UPDATE: the link is to a companion piece, The Black bill, Green and the Blue Eagle: "to bargain collectively through representatives of their own choosing" that updates the story to the 1930s and "labor's Magna Charta," section 7(a) of the New Deal National Industrial Recovery Act.)
Posted by Sandwichman at 12:47 AM