Who knew? People oppose austerity -- because the lump of labour fallacy! 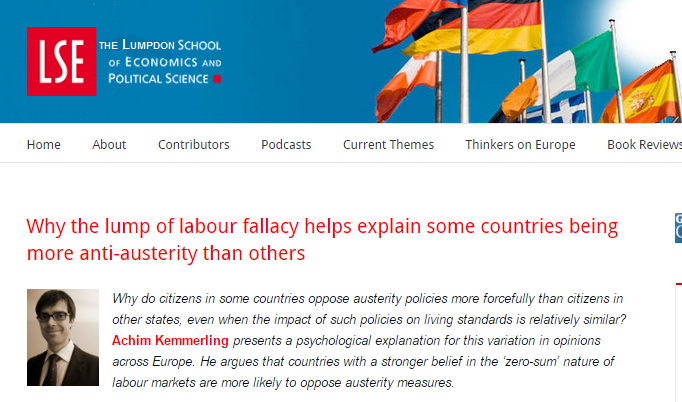 "The basic story put forward to justify austerity is that a reduction in debt will generate an economic turnaround, but why have people rejected this narrative? Some economists would say that people have rejected it simply because it is wrong, but the problem is more protracted than this." -- Achim Kemmerling

Note: This article gives the views of the author, and not the position of EUROPP – European Politics and Policy, nor of the London School of Economics.

Abstract: The lump-of-labor fallacy has been called one of the “best known fallacies in economics.” It is widely cited in disparagement of policies for reducing the standard hours of work, yet the authenticity of the fallacy claim is questionable, and explanations of it are inconsistent and contradictory. This article discusses recent occurrences of the fallacy claim and investigates anomalies in the claim and its history. S.J. Chapman's coherent and formerly highly regarded theory of the hours of labor is reviewed, and it is shown how that theory could lend credence to the job-creating potentiality of shorter working time policies. It concludes that substituting a dubious fallacy claim for an authentic economic theory may have obstructed fruitful dialogue about working time and the appropriate policies for regulating it.
Posted by Sandwichman at 12:00 PM

How come we never hear about the rich folks' lump of wealth fallacy?

There are all sorts of lump. Herr Kemmerling's lump seems to be of the smelly variety.

I don't know whether the internet transpires odour, but a) you can discuss whether it is a fallacy or not (as I pointed out repeatedly, I am not so sure myself), and b) people do differ in whether they would agree not to the fallacy (nobody would say he believes in a fallacy), but in the idea that we run out of jobs. That's all I am saying.

If that is all you are saying, then framing it in terms of an alleged fallacy is a rather inarticulate and misleading way of saying it. Unless, that is, you are trying to insinuate the "rationality" of austerity policies and the "irrationality" of those who oppose them. In that case it is not inarticulate, just disingenuous.