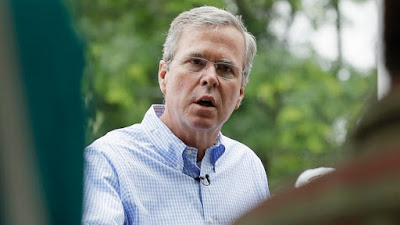 "My aspiration for the country and I believe we can achieve it, is 4 percent growth as far as the eye can see. Which means we have to be a lot more productive, workforce participation has to rise from its all-time modern lows. It means that people need to work longer hours and, through their productivity, gain more income for their families. That's the only way we're going to get out of this rut that we're in."

How many more hours? Let's put this in perspective.

If the median income household earned a median hourly wage, they would need to work a total of 2942 hours a year, assuming 155 hours a year (5%) vacation and holiday pay.

The Bush household had 140 times as much income in 2013 as the median U.S. household.

To earn as much income as the Bush household, the median household would have to work an additional 8,600 hours -- night and day for a whole year -- each week.
Posted by Sandwichman at 9:12 PM

You need to work more so I can get 4% better share prices. Thanks, Jeb.

And regarding Jeb's extraordinary speaking fees, is that not an indirect manner of corporate America to pay ahead their part of the quid pro quo agreement with this Bush junior to keep their taxes low and so too the taxes of their executives? I seem to recall that George W. was financially front loaded as well though in a slightly different manner. What accounts for his having been given, gratis, a significant share in the Texas baseball franchise that he was made CEO of without any prior experience in baseball or corporate administration. Funny how wealthy one can become on the out skirts of American politics.

Jeb is an example of a lump of brainpower.

Jack: "Jeb's extraordinary speaking fees, is that not an indirect manner of corporate America to pay ahead their part of the quid pro quo agreement..."

As one might conclude from his comments posted here, the fees aren't be for his profound insights on economics and governance. One might thus suspect they are quid pro quo for past and future "considerations."

But in America these days a bribe is only a bribe if both the briber and the bribee proclaim it to be one, as in:

"I hereby transmit to you this bribe in consideration for favors rendered, past, future or present."

"I hereby accept this bribe in payment for favors rendered, past, future or present."