Pinch me. Are we actually having this conversation? Should morbidly obese Americans eat more doughnuts? I am fond of quoting Thomas Pynchon's epic line from Gravity's Rainbow, "If they can get you asking the wrong questions, they don't have to worry about answers."

Barro's column pursues the "balanced, objective" framing device of looking at "both sides" of a wrong question. Bruenig points out the flaw in Barro's central theme of regulatory and tax "distortions" that discourage even longer hours of work. Barro's framing ignores much greater and more fundamental distortions that impose longer hours. "If we are going to have a work debate," Bruenig concludes, "it should proceed by asking ourselves how much time we want to spend toiling our scarce lives away, not muttering incoherently about what distorts what."

Bruenig presents two charts that compare hours worked in the U.S. to other countries. The first chart plots the ratio of annual hours to labor productivity. The second chart compares each country's hours/productivity ratio to an aggregate norm. The U.S. is a long-hours outlier in both. 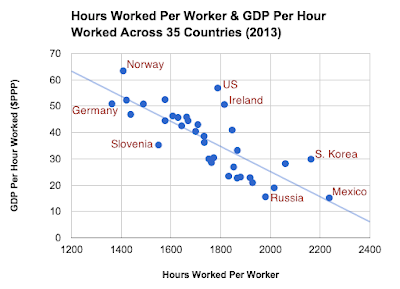 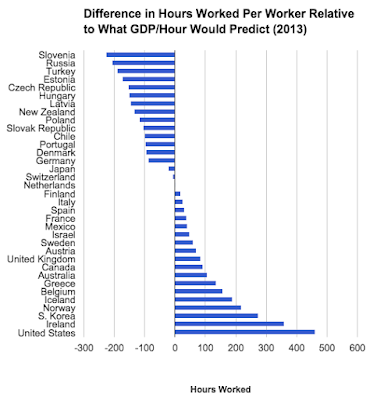 In plain language, what these charts reveal is the inordinate emphasis in the U.S. on GDP. In fourth-grade arithmetic terms, the index called "productivity" is a fraction. It has both a numerator and a denominator. The numerator is GDP. The denominator is hours of work. The result of this operation of division is called the quotient. Productivity is a quotient. A quotient is increased by either increasing the numerator or decreasing the denominator (or both).

There is an extensive literature on the systematic errors made by children learning rational number concepts. Those errors result from attempts to apply rules that have been previously learned about whole numbers  to new situations where those rules are not relevant. Mistaking a quotient (productivity) for a numerator (output) would be an example of this kind of systematic error. Would it be asking too much for economists to set aside their indulgence in arcane mathiness and attend instead to the pervasive ignorance of fourth-grade rational number concepts that underlies the single-minded obsession with "economic growth"?
Posted by Sandwichman at 5:05 PM

You see the same kind of error with debt/GDP and other ratios.

Considering the error rates of fourth graders learning about fractions (one study found 88% using "errorful rules"), it would be surprising if any public discourse avoided the pitfalls.

But there is hope:

"Errorful rules, on this view, are intrinsic to all learning-at least as a temporary phenomenon-because they are a natural result of children's efforts to interpret what they are told and to go beyond the cases actually presented. Several analyses have shown that these errorful rules are intelligent constructions based on what is more often incomplete than incorrect knowledge. Errorful rules,then, cannot be avoided in instruction. In fact, they are best regarded as useful diagnostic tools for instructors, who can often use children's systematic errors to detect the nature of children's understanding of a mathematics topic."

Research has indicated that adults in general are better at interpreting whole numbers than fractions, and some cognitive errors disappear when numerical facts are framed in terms of whole numbers instead of fractions or integers. E. g., "three out of four doctors" instead of "75% of doctors". Or two million unemployed instead of X% unemployment.

And I bet adults would do worse.

It's an interesting question. Context is key here. Can people order fractions successfully in concrete situations but not in abstract problems?

"Lester (1984) found that 50% of preservice elementary teachers [N>600] were unable to reach the 75% criterion on a test of arithmetic competency and that most often this failure was traced to the questions which involved fractions and/or decimals.

"On a test of decimal concept knowledge, Thipkong and Davis (1991) classified in the low category 45% of the 65 preservice elementary teachers investigated. They stressed the importance of identifying likely weaknesses in preservice teachers' content knowledge so that steps can be taken to prevent or correct misconceptions before they adversely influence students' learning.

"Grossman (1983) reported that less than 30% of the 7,100 entering freshmen students at the City University of New York selected the correct answer on a question which asked them to select the "smallest" of a given set of five decimals. The most frequent incorrect answer was the "longest" decimal in the set and this was selected more frequently than the correct answer (Grossman, 1983, p. 32)."