CREATION LEAPS FROM STAR TO STAR

Carl Snyder was an enthusiastic advocate of Pareto's law of income distribution, arguing that "the wealth, capital, and broad diffusion of comforts in the more highly developed civilizations like those of the United States and Europe, are the product of an extraordinarily small number of men." Any attempt to redistribute income away from the "true creators... the true saviours of our modern world" (such foolish notions being "one of the strongest drives within those vast lower levels of our neolithic population") inevitably leads to "the ruthless destruction of civilization by these barbarian hordes."

Snyder's ecstatic brand of pro-plutocratic faith and rhetoric endeared him to the folks at the Mises Institute, where one can download a copy of his Capitalism the Creator. But even a cursory glance at Snyder's book jacket-featured chart reveals that Snyder didn't solely attribute to capitalistic accumulation "the fruits of this fine flower which we call civilization." Sharing credit for the economic miracle is our old friend, "primary power."

Energy that is. From hydrocarbons (mostly). Fossil fuel.

Virtually the same chart is reproduced inside the book on page 75, titled "VIII. THE SOURCES OF OUR GREAT WEALTH AND INCOME. It shows the value of manufactures, total primary power, an index of trade and production and capital invested in manufacturing. In Chart XII, on page 113, "much the same thing is given in a different form" for the benefit of those many persons (obviously not "true creators") who find "the ordinary charts... difficult to follow." Chart XII once again "compares the amount of capital invested, the 'value added' in manufacture (over the cost of raw materials), and the number of horsepower used in primary power":


A glance suffices to reveal how close is the association, very strongly suggesting, perhaps even proving that increased product in manufacturing can only be attained through the increased use of machinery, of which the amount of horsepower employed is an excellent index. In turn, this increase in use of machinery and of primary power is possible only through the increase in the capital employed. No other conceivable way.

No "decoupling" of output from "horsepower." We'll come back to that.

Meanwhile, it was fascinating to discover that Snyder was as infatuated with Svante August Arrhenius's cosmical physics as he was with capitalism's immaculately-conceived incarnation of Vilfredo Pareto's law of income distribution. Arrhenius is best known today for his 1896 theory that climate may be affected by decreases or increases in the atmospheric concentration of carbon dioxide and other, so-called greenhouse gases.

In addition to his glowing review in the New York Times of Arrhenius's  Das Werden der Welten, the headline of which is reproduced in the lead graphic of this post, Snyder wrote The World Machine -- The First Phase -- The Cosmic Mechanism, a book he described as the "first connected presentation in English" of Arrhenius's ideas:


These ideas formed, as it were, the capstone or the keystone of a view of the world-process which has been slowly growing through the centuries and that must eventually impose upon all who trouble their minds with such matters.

Getting back to that matter of decoupling output from horsepower, at least, Snyder's "no conceivable way" may turn out to be pretty hard to dispute, after all. The graph below is from Rethinking Economic Growth Theory from a Biophysical Perspective, by Blair Fix. It plots five-year average growth rates for "useful work" and real GDP. 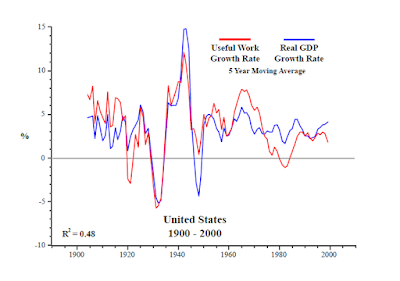 There doesn't appear to be any trend of decoupling here, as there is for the relationship between GDP growth and primary energy consumption. This would suggest that most of past energy savings have come from efficiency gains in the conversion of primary energy to useful work. Fix explains that "this embodied form of technological progress has inherent limits stipulated by the laws of thermodynamics." See also the following presentation by Blair Fix, "Economic Growth as a Power Process" October 27, 2015:

ABSTRACT: Is economic growth a miracle of the free market? According to mainstream theory, growth is best ensured through conditions of ‘perfect competition’. However, economic growth is tightly correlated with the concentration of power in the hands of large corporations. Why? The capital as power framework provides potential answers that turn mainstream theory on its head: growth seems to be intimately related to the formation of hierarchy. Blair Fix is a PhD student at the Faculty of Environmental Studies, York University.

In a roundabout way, Fix's argument brings us back to to the Pareto power law of income distribution, by way of George Zipf (and Zipf mostly by way of Mario Giampietro!). Only this time, the implication is less beneficent than Snyder's notion of the "true creators... the true saviours of our modern world" (Chapter VII of Capitalism the Creator is titled "Capitalism the Beneficent").

But let us not part on a sour note! Here is Carl Snyder's idyllic vision of the future Technology has in store for us all:


We shall not need old age pensions or security laws, because the advance in Technology will not be confined to machinery and to processes; we shall have an equal advance in the technique (very simple and, as we now know, easily attained) of economic and monetary stability, so that we shall have no more business depressions, nor crazy speculation, nor wide unemployment and decline in the production of wealth. And these will be eradicated, not by childish and futile attempts at government fiat, but by the unbelievably simple methods of credit control. That is, we shall learn to understand and run the economic mechanism as smoothly as we do now that of a powerful electro-generating plant, or a Leviathan of the sea; and economics and economists, perhaps, will rise to larger knowledge and a new dignity and sphere of usefulness.

Unbelievably simple? Simply unbelievable.
Posted by Sandwichman at 5:48 AM

First, the book was written in 1940 so we have 75 years to look at for some measure of the predictive validity of Snyder's concepts. From the last section that you quote, " ...And these will be eradicated, not by childish and futile attempts at government fiat, but by the unbelievably simple methods of credit control." That now raises the question of whose credit will be controlled and in whom will that control be vested? it seems true that some of us have seen controls on our credit applied, misapplied and removed. Who does the controlling seems to depend upon who it is that needs to be controlled. "..the unbelievably simple methods.." of such controls seem not to be so simple, or maybe just simple minded or simply out of control.

And I haven't noticed any trace yet of the, "so that we shall have no more business depressions, nor crazy speculation, nor wide unemployment and decline in the production of wealth", part of Snyder's story. Do people still reference this kind of vintage capitalist lackey bullshit?

The 20th century was Paretian in mainstream economics. What that means is that thinking was constrained by a "principle" that doesn't have and never had any basis in reality and that contributes nothing but confusion and obfuscation to analytical thought.

Pareto optimality does not exist. One might as well be talking about "the banner of bleeding meat on the silk of the seas and of the Arctic flowers." They do not exist. There is no there there and there is no way to get from here to the there that is not there.

Snyder's usefulness is that he blurts out the sole purpose of the Paretian charade -- upholding privilege: civilization is the rich getting richer; anything else is barbarism. And he appears to do so in all innocence.