Something’s Rotten in the State of Reporting About Denmark

A report on budget cuts to alternative energy programs in Denmark in today’s New York Times provides a depressing example of siloed journalism.  The piece is abuzz with righteous green indignation at the decision of Denmark’s new right wing government to defund programs that support innovation in renewable energy, particularly as it coincides with COP21 in Paris.  I share its anger.

But there’s another side to the story.  The new energy minister, quoted in support of the cuts, gives the motivation as budget balancing.  And the article seems to endorse him, saying in the second paragraph that the new ruling coalition is “determined to tighten spending and balance the budget in a program to grow the economy.”

Is growing the economy a good idea?  Sure: 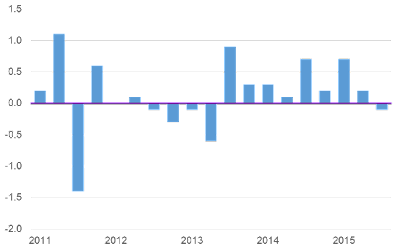 This is Denmark’s real GDP growth, quarter on quarter, since the beginning of 2011: sluggish at best and possibly returning to negative territory.

But this is an argument for increasing spending, not cutting it.  There is no reputable economic theory that justifies reducing government spending as a means to accelerate economic growth.  If the government of Denmark makes this claim it should be reported as a sign of either its ignorance or duplicity.

Suppose for comparison the esteemed minister had said, “We are cutting public support for renewable energy because climate change is a hoax perpetrated by a devious cult of scientists who hate capitalism and want to get bigger grants.”  (Politicians in other countries have been known to claim this.)  Would the Times have told us that the newly elected government is “determined to oppose the hoax of climate scientists” and leave it at that?  Well, there’s no difference.  BS is BS, whether it’s climate denialism or economic nonsense.

Incidentally, Denmark has vast fiscal space to maintain and even increase its borrowing to finance green investments.  (The country maintains its own currency.)  10-year bonds are currently paying about .9%, which is just half a percent in real terms.  Markets are eager to fund Danish debt at rock-bottom rates, so even projects with a marginally positive rate of return easily clear the hurdle.

Question: if the article had been about economics, and a government spokeman had invoked absurdities about the climate, would the Times have been as passive?  Why is economic literacy optional for journalists?

UPDATE: Dean Baker is on the case too.
Posted by Peter Dorman at 4:03 PM

The danish government has already been shamed into increased spending.
Remember this is european democracy. The leading party is only the third largest in parliament, and it needs support from 2-4 other parties to reach a majority. Some ridiculous ideas have been proposed just to get negotiations started. This will not be the last crazy suggestion that later on gets scrapped because a majority would not vote for it.

JH: Thanks for this update. It's good to hear that the situation is not as dire as the NYT would have us believe. My target, of course, is not so much the current coalition in Denmark but the Times and its awful reporting. A government can say almost anything it wants about economics, and a paper like the Times will report it with a straight face.

Re: "...This is Denmark’s real GDP growth, quarter on quarter, since the beginning of 2011: sluggish at best and possibly returning to negative territory..."

It seems to me that, if citizens were to reduce their expenditure on energy from the electricity grid (assumed to be fed with fossil fuels) and then replaced it with renewable sources locally, then the nations' GDP would go down.

Because energy harvested locally, without the expenditure of money, is not going to be reflected in 'gross domestic product'. Except for the initial investment in solar panels, wind turbines etc.

Discussions about the state of an economy are surely insufficient if their basis is a flawed measurement?

Many humans, however, tend to spend money in other areas of the economy when they reduce their expenditure somewhere else.