The Mystic Labyrinth of Free Trade

It seems after all that the free-trade doctrine is just a more subtle form of mercantilism. -- Joan Robinson

In The Wealth of Nations, Adam Smith built his case for his 'system of natural liberty,' in part, on a polemic against the alleged 'mercantile system.' Since the late 1930s historians have questioned the 'systematic' nature of the discourse labeled mercantilist. A. V. Judge wrote, in 1939, "Mercantilism never had a creed; nor was there a priesthood dedicated to its service." D. C. Coleman amplified those doubts two decades later, observing that, "as a label for economic policy," the term 'mercantilism':


...is not simply misleading but actively confusing, a red-herring of historiography. It serves to give a false unity to disparate events, to conceal the close-up reality of particular times and particular circumstances, to blot out the vital intermixture of ideas and preconceptions of interests and influences, political and economic, and of the personalities of men, which it is the historian's job to examine.

A red herring is an "irrelevant diversion" but in this case the image of the red herring may itself be a red herring. The diversion is relevant, after all -- just not in the way it has usually been understood. Taking a cue from Robinson's witticism about the free-trade doctrine, a more apt metaphor for the diversion would be mirror maze, such as found in old amusement parks. Laissez faire caught a fleeting glimpse of itself stealing 'round the edge of a mirror and mistook it for a bête noire. The mercantile system was Smith's system of natural liberty's reflected double. 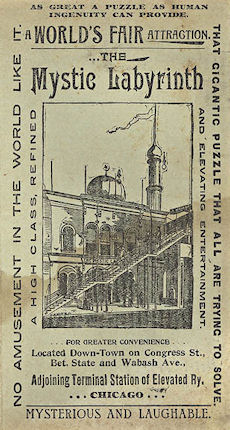 A funny thing happened on the long and twisting road from Smith's polemic to the neoclassical growth model: the return of the repressed. The mortal sin of the mercantile system, "this popular notion, that wealth consists in money or in gold and silver," snuck back in disguised as the 'aggregate value' of capital in the production function -- ectoplasmic leets! Leets are BETTER than money, though, because although they look and act just like money, they are not money because the neoclassicals call them 'capital'.

That's no red herring; it's a mystifying labyrinth. The gigantic puzzle that all are trying to solve. As great a puzzle as human ingenuity can provide. No amusement in the world like it. A high class, refined and elevating entertainment. Mysterious and laughable.
Posted by Sandwichman at 5:45 PM