A Free Market is Always Full of Cheap Ideas 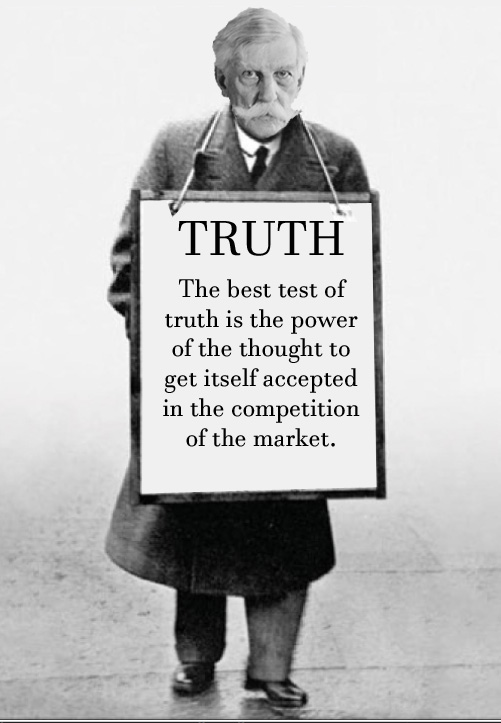 I may have scoffed in the past at the notion of "the marketplace of ideas" but I am coming around to think that maybe it's not such a bad metaphor. Back in the days of primitive economy, families, clans, tribes produced and consumed their own subsistence. If a surplus was produced beyond what was to be set aside for contingencies, it might be given as a gift to a neighboring group, setting up the obligation of a reciprocal gift.
Eventually, gift exchange was supplemented and/or supplanted by barter. What was traded, though, was still the superfluous produce after the group had met its own needs. Production for markets only gradually encroached upon production for need that incidentally produced a surplus. In societies dominated by capital, superfluous production became a condition for necessary production.
In such societies, "superfluous" speech -- advertising, propaganda, entertainment -- also became a condition for communication of "truth" -- or at least "news." Thus, the metaphor of the "marketplace of ideas" is not so outlandish -- it just doesn't mean what Oliver Wendell Holmes presumably thought it meant. There is no "one man, one voice" competition. Instead, monopolies of word and image determine what will be heard and seen the most. As A. J. Liebling wrote, "freedom of the press is limited to those who own one."
Social media has created the illusion that anybody can become a celebrity in a viral heartbeat, as if the circuits of social media amplification were not as dominated by advertising, propaganda, and entertainment as any television network. What the competition of the market tests, though, is not the "truth" of ideas but their marketability. That is to say, their superfluity relative to truth.
Posted by Sandwichman at 8:46 PM

What the competition of the market tests, though, is not the "truth" of ideas but their marketability. That is to say, their superfluity relative to truth.

[ Forgive me, but after several readings I have no idea what this essay is about. Possibly the reason is that "truth" is undefined. ]

To paraphrase Supreme Court Justice Potter Stewart regarding hard-core pornography: "I shall not today attempt further to define the kinds of material I understand to be embraced within that shorthand description [truth] and perhaps I could never succeed in intelligibly doing so. But I know it when I see it."

William James was a pragmatist, actually the term "pragmatism" belongs to James. The term for James meant that the truth of an idea was found in the difference the idea made in lives. This was discussed extensively in important work by James and by contemporary philosopher Charles S. Peirce.

Forgive me, but the evasion in the reply is unhelpful. Does your essay fit the definition or use of truth by James?

Although it may seem like an evasion, it is actually a negative definition. Holmes gave a definition of truth -- that which passes the competitive test in the marketplace. My entire piece was a refutation of the marketplace as a test of anything but marketability and superfluity. I know you are frustrated that this leaves "truth" undefined, which is as it should be. Truth can only be discerned.

Holmes * gave a definition of truth -- that which passes the competitive test in the marketplace....

* Holmes was a personal friend and classmate of William James.

This is a fine, fine explanation.

While I think your explanation excellent, do consider James' understanding of truth. James was a seminal American philosopher-psychologist.

However, your short essay is splendid and I am grateful for it.

«the marketplace as a test of anything but marketability and superfluity.»

The counter argument is that eventually "marketability" converges to "validity", because bad products and false ideas eventually are competed out of the market. Which relies on the markets actually being competitive, at least in the long term, which our blogger seems to deny.

But then the argument can be extended into a "darwinian" way: that whatever "truth" may be, if "truth" confers survival advantages, in the long run people and groups that fail to discern the "truth" will wither and disappear, whether markets are competitive or not.

«I know you are frustrated that this leaves "truth" undefined, which is as it should be. Truth can only be discerned»

Those “I know it when I see it” and “discerned” to me seem to imply a claim that the meaning of "truth" like "beauty" lies in the eye of the beholder; that may look like thinking that it is entirely subjective.