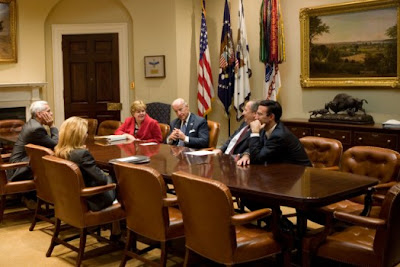 "We don't think that 'less bad' is good. 'Less bad' is not our measure of success." -- Vice President Joe Biden

Vice President Biden assures Americans that the Recovery Act, by some estimates, has already saved and created a million jobs. Think of it! A million jobs! That's like a one with six zeros after it.

Meanwhile, buried deep in the BLS employment report today is mention of the "benchmark revision" for 2008, subtracting 825,000 jobs. Those job losses don't show up in the monthly statistics or even in the revisions. They only show up a year later in the benchmark revision. The prime suspect for the extent of the discrepancy is the BLS birth/death model, which added a net total of 904,000 717,000 "imputed" jobs to the fiscal 2008 employment situation reports. So far this year there have been 707,000 815,000 imputed jobs added to the BLS reports. If 90% of we assume those jobs don't actually exist, as in 2008, then the cumulative statistical distortion is 1.5 1.6 million jobs. That's more than half again as many phantom jobs created by statistical miscalculation as estimated to be saved and created by the Recovery Act!

"Less bad" may indeed not be good. But getting worse somewhat more slowly is not even "less bad". It is just plain worse.

Eight months ago, when the "White House Task Force on Middle Class Working Families" was announced, the Sandwichman sent Jared Bernstein a draft submission, outlining the role that work-time reduction could play in a full-employment strategy. A month and a half later, I posted a final version of the submission and submitted a summary to the Task Force along with a link to the full document.

I am posting it again for your information...

P.S. -- except I keep getting error messages when I try to submit this to the White House Task Force webpage.

"P.S. -- except I keep getting error messages when I try to submit this to the White House Task Force webpage."

They're trying to tell you that suggestions and alternate opinions are not welcome. The definition of a Washington Task Force is that of a group that has the force with them and need not be bothered by the good opinions of anyone else in coming a conclusion regarding the best way to conclude a task.
May the Force be with all of us once their Task is concluded. It's straight forward DC logic. We have a conclusion to begin with, now let's find a means by which to draw it from the problem we're about to discuss.

No, they weren't trying to tell me anything. They were just having technical difficulties. I succeeded in submitting this morning.

But the thing with these "suggestion box" deals is that they're just trolling for vox populi-ish sounding sound bites to festoon their approved-by-lobbyists same old same old policy enervations with.

Sandwichman,
Are we really making different points? Else where I raised a question that your comment makes reference to. That being, how do we distinguish between our elected representatives and the lobbyists with whom the conspire? Granted that the latter are paid by corporate interests and the former by the Treasury, but they serve the same interests and come to the same conclusions. In fact they are both financially supported by corporate interests, only the lobbyists admit to their primary allegiance while our elected representatives act out a charade.
Is this any way to run a government? Perhaps Sen. Grassley was correct when he suggested that the government is a predator. Though he neglected to recognize his own participation in the system of predation to which he referred.