They have taken untold millions that they never toiled to earn,
But without our brain and muscle not a single wheel can turn.
We can break their haughty power, gain our freedom when we learn
That the union makes us strong.

The Hamilton Project bills its "The Future of Work in the Age of the Machine" as a "framing paper." The "frame" (or frame-up) appears on page two of the paper:

The Luddites, as they were called, were revolting against a phenomenon that would fundamentally alter the economies of the world. Technological change would dramatically increase the productivity of labor, creating new possibilities in manufacturing, agriculture, mining, and transportation. While these changes ultimately raised the standard of living in industrialized countries, the Luddites, and many others, saw their jobs disappear (Easterly 2001).

Those "Luddites" (as they were called) were notorious for breaking frames. They were also framed.

From the report of the proceedings of the trial of George Melior (or Mellor), William Thorpe and Thomas Smith for the murder of William Horsfall of Huddersfield, Yorkshire, it would appear (to this reader at least) as though the defendants were indeed guilty as charged. So in what sense am I claiming they were "framed"? The prosecutor, Mr. Richardson saw fit to present his "general observations on the case" -- unsupported by the testimony of witness -- regarding a certain "delusion that has prevailed... amongst the lower orders." 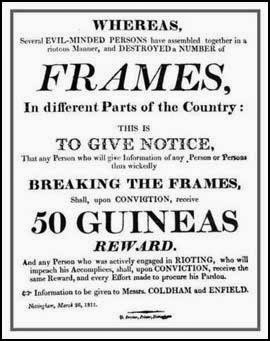 Mr. Horsfall is represented to me to have been a man, who had upwards of four hundred persons at work under him, extremely beloved by his men, and they greatly attached to him. He had very large manufactories, of course, from the employment of so many men; and he employed the machinery which was the object of the abuse of these misguided people. I have not the means of making such observations as I have frequently and lately heard made, upon the delusion which has prevailed upon that subject, amongst the lower orders. It has been supposed that the increase of the machinery by which manufactures are rendered more easy, abridges the quantity of labour wanted in the country. It is a fallacious argument: it is an argument, that no man, who understands the subject at all, will seriously maintain. I mention this, not so much for the sake of you, or of these unfortunate prisoners, as for the sake of the vast number of persons who are assembled in this place.

I hope that my learned Friend on the other side, will give me credit, that I mean to state no facts as bearing upon the prisoners at the bar, that I shall not, as I conceive, bring home to them. But I cannot help making general observations upon the subject, to draw their Lordships' attention, and yours, to the case itself. I would rather, for perspicuity's sake, go to the facts which constitute the crime, and then apply it to the prisoners. Mr. Horsfall was a man, I understand, of warm feelings*, of great and good understanding, and who saw the fallacy of these arguments; and he, perhaps imprudently (though I do not think so, for I do not think any man acts imprudently in stating his sentiments on a subject which has been under his full consideration) he, I say, stated he would support this species of machinery, because he was sure it was advantageous to the country. He was perfectly well known, in consequence of the part he has taken in reference to these disturbances; and it was proposed by some persons, that he should be taken off.

* What Mr. Richardson meant by "warm feelings" is not what one might suppose. The "warmth" doesn't refer to compassion or tenderness. It alludes instead to Mr. Horsfall's taunt that he wished to "ride up to my saddle girths in Luddite blood."

Catch that? "I have not the means of making such observations..." "I mean to state no facts as bearing upon the prisoners at the bar, that I shall not, as I conceive, bring home to them." In short, this peroration was a digression. It was admittedly incidental to the matter at trial. But it was politically crucial. Not only was Mr. Richardson concerned with securing a conviction for murder but, perhaps even more urgently, with establishing, for the record, the collective guilt of those "lower orders" for "outrages" arising from their delusion and their fallacious argument. Those lower orders had no grounds for complaint.

The authors of the Hamilton Project framing paper cited William Easterly as the source for their digression on the Luddites (as they were called). Easterly called his passage on the Luddites "an aside about the Luddite fallacy." Apparently not having consulted Mr. Richardson's Indictment, Easterly claimed that "the intellectual silliness came later":

Some people believe labor-saving technological change is bad for the  workers because it throws them out of work. This is the Luddite fallacy, one of the silliest ideas to ever come along in the long tradition  of silly ideas in economics. …

The original Luddites were hosiery and lace workers in Notting  ham, England, in 181 1. They smashed knitting machines that embodied new labor-saving technology as a protest against unemployment (theirs), publicizing their actions in circulars mysteriously  signed “King Ludd.” … The intellectual silliness came later, when some thinkers generalized the Luddites’ plight into the Luddite fallacy: that an economy-wide technical breakthrough enabling production of the same amount  of goods with fewer workers will result in an economy with—fewer  workers. Somehow it never occurs to believers in Luddism that there’s another alternative: produce more goods with the same number of workers.

Actually the allegation of intellectual silliness came three decades earlier -- in the form of a pamphlet by the Lancashire magistrate, Dorning Rasbotham, Thoughts on the Use of Machines in the Cotton Manufacture. Accusing frame breakers of irrational techno-phobia became a commonplace in industrializing Britain. That way you don't have to acknowledge or deal with their grievances.The Luddite fable serves the same purpose today  Opponents of austerity, pension cutbacks, neo-liberal trade policies and labor-market deregulation, along with proponents of work-time reduction can be glibly dismissed without having to acknowledge their arguments. Those lower orders are all deluded. They assume that their is only a fixed amount of work to be done. There's no point listening to their silly ideas or reasoning with them.

Above all, forget about the masterful lampoon and exposé of this dodgy frame by Marx in section 6, chapter 15. volume I of Capital, "The theory of compensation as regards the workpeople displaced by machinery":


It is an undoubted fact that machinery, as such, is not responsible for "setting free" the workman from the means of subsistence. It cheapens and increases production in that branch which it seizes on, and at first makes no change in the mass of the means of subsistence produced in other branches. Hence, after its introduction, the society possesses as much, if not more, of the necessaries of life than before, for the labourers thrown out of work; and that quite apart from the enormous share of the annual produce wasted by the non-workers. And this is the point relied on by our apologists! The contradictions and antagonisms inseparable from the capitalist employment of machinery, do not exist, they say, since they do not arise out of machinery, as such, but out of its capitalist employment! Since therefore machinery, considered alone, shortens the hours of labour, but, when in the service of capital, lengthens them; since in itself it lightens labour, but when employed by capital, heightens the intensity of labour; since in itself it is a victory of man over the forces of Nature, but in the hands of capital, makes man the slave of those forces; since in itself it increases the wealth of the producers, but in the hands of capital, makes them paupers-for all these reasons and others besides, says the bourgeois economist without more ado, it is clear as noon-day that all these contradictions are a mere semblance of the reality, and that, as a matter of fact, they have neither an actual nor a theoretical existence. Thus he saves himself from all further puzzling of the brain, and what is more, implicitly declares his opponent to be stupid enough to contend against, not the capitalistic employment of machinery, but machinery itself.

No doubt he is far from denying that temporary inconvenience may result from the capitalist use of machinery. But where is the medal without its reverse! Any employment of machinery, except by capital, is to him an impossibility. Exploitation of the workman by the machine is therefore, with him, identical with exploitation of the machine by the workman. Whoever, therefore, exposes the real state of things in the capitalistic employment of machinery, is against its employment in any way, and is an enemy of social progress! Exactly the reasoning of the celebrated Bill Sykes [the villain from Dickens's Oliver Twist]. "Gentlemen of the jury, no doubt the throat of this commercial traveller has been cut. But that is not my fault, it is the fault of the knife. Must we, for such a temporary inconvenience, abolish the use of the knife? Only consider! where would agriculture and trade be without the knife? Is it not as salutary in surgery, as it is knowing in anatomy? And in addition a willing help at the festive board? If you abolish the knife — you hurl us back into the depths of barbarism."

Is there aught we hold in common with the greedy parasite,
Who would lash us into serfdom and would crush us with his might?
Is there anything left to us but to organize and fight?

For the union makes us strong.

Posted by Sandwichman at 2:00 AM

Does this mean that (a) people think you are incurable or (b) everybody just accepts and believes what you're saying (yawn).

In any case, the truth can take infinite repetition.