Cheap trips to the lakes

We are experiencing climate change with a vengeance in British Columbia. For the past four summers, we have had horrific wildfires that send smoke all the way from the interior to the west coast of Vancouver Island. Last summer, we had a record-breaking "heat dome" that killed over 600 people and, after registering all-time heat records for several days, the town of Lytton burned to the ground.

Currently, our third atmospheric river in three months has forced the evacuation of Merritt, B.C., many homes in Princeton and a vast area of farmland with around 3000 inhabitants in Abbotsford. The flooded area used to be the bottom of Lake Sumas, which was drained in 1924 but is threatening to return. All routes out of Vancouver to the interior or south to the U.S. have either been flooded, covered with mudslides or in several cases, major highways have simply been washed away.

The miracle of Barrowtown

People are filling sandbags in western Chilliwack to then ferry across to Barrowtown. So many people turned out after word spread on social media that people are urging people to stop coming.

Barrowtown is the pumping station in Abbotsford that keeps Sumas Prairie from reverting to Sumas Lake. The lake was drained in 1924 to create a large expanse of agricultural land. On the other side of a dike is the mighty Fraser River. It wasn't the Fraser, though, that flooded Sumas Prairie over the past few days but the Nooksack River in Washington State that overflowed its banks and diverted into the Sumas River headwaters.

The flood from the Nooksack/Sumas River came close to overwhelming the Barrowtown pumps last night. If one pump failed, all four pumps would have to be shut down. If the water level reached the level of the pump house, the pumps would all fail or have to be shut down. When the pumps stopped working, water from the Fraser River would begin to flow into the lake bed to raise the flood level to over three metres.

Last night, the catastrophe seemed inevitable to the mayor and city engineers. It was averted by the sandbag dam built around the pumping station by hundreds of contractors, firefighters, and volunteers aided by more volunteers filling sandbags in Chilliwack. 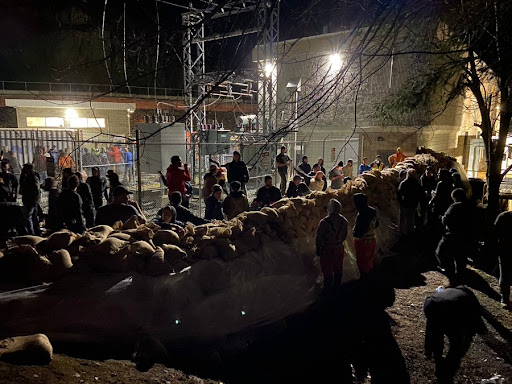 The fire next time

BREAKING: Large fire breaks out in Sumas Prairie near Whatcom

Video taken by Black Press Media shows loud continuous bangs coming from the area. On Wednesday (Nov. 17) morning, Mayor Henry Braun said that hundreds of recreational vehicles were on fire, leading to noxious smoke in the area. He asked residents nearby to shut their doors and windows and turn off air conditioning system to avoid breathing in the smoke.

The area is currently under an evacuation order due to the ongoing flooding. 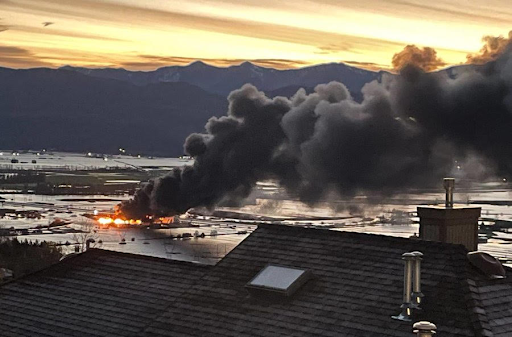 The "loud continuous bangs" are the propane tanks on the recreational vehicles exploding. Several things about the "series of unfortunate events" in Abbotsford come to mind. The draining of Sumas Lake was GEO-ENGINEERING. When it was good, it was very, very good. But when it went bad it was horrid. It was geo-engineering on a small, regional scale. The unanticipated challenge came from the Nooksack. The pumping station wasn't designed to handle a flood from a river that had long ago changed its course. Not to mention the atmospheric river.

Water, water everywhere... and hundreds of recreational vehicles on fire. Think about that name, "recreational vehicles." Another kind of geo-engineering. By unnecessarily burning copious amounts of fossil fuel, one can remove one's family from urban/suburban industrial congestion and "commune with nature" in a sort of industrially-congested way. WTF is that about?? The whole recreational vehicles thing can be traced back to William Wordsworth and his poetry about walking through the Lake District. But who the hell has the time to walk? And how much of the comforts of civilization can one cram in a backpack? (Rhymes with Nooksack.)
Several decades after Wordsworth wrote his Guide through the District of the Lakes, and three years before his death, the Kendal and Windermere Railroad completed a rail line to Windermere and began advertising "Cheap Trips to the Lakes," with, of course, Wordsworth's cottage in nearby Grasmere one of the big attractions. I like to think of that railway as the mother of all recreational vehicles. Cheap trips to the lakes, indeed. 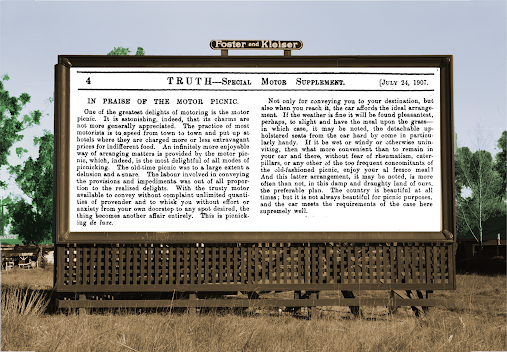 In its infancy, the motor car was marketed to "society" -- people with means, that is -- as a recreational vehicle. The whole point of owning a car was to go on a jaunt to the countryside or the seaside for a picnic or a stopover at a resort. Why do people love their cars? Because the car enables them to get away from it all. Even if they never do and even if the car makes a big part of "it all" that they want to be able to get away from.
Cheap trip to the lake, indeed.
Posted by Sandwichman at 3:05 PM

Are you ever writing well; compelling essay.