LIFE, melancholy and the American Way

In "The Gospel of Consumption," Jeffrey Kaplan channels the Sandwichman, arguing that if we want to save the earth we can start by sharing the work and the wealth. Kaplan borrows liberally from Ben Hunnicutt's books (Kellogg's Six Hour Day and Work Without End: Abandoning Shorter Hours for the Right to Work) and about the triumph of consumer culture over working less and also features a discussion of the anti-New Deal "American Way" publicity campaign conducted by the National Association of Manufacturers. 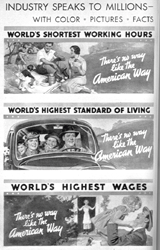 Co-incidentally, in my own research on the NAM, I kept stumbling across an article by John Tagg, titled "Melancholy Realism: Walker Evans's Resistance to Meaning". This morning I discovered that I had access to an online version of the article.

Tagg frames his discussion of the NAM American Way campaign with a discussion of the famous LIFE magazine photo by Margaret Bourke-White showing a breadline of African-American flood refugees in front of one of the 60,000 American Way billboards, this one proclaiming the "world's highest standard of living." Later in the article, he goes on to contrast Bourke-White's rhetorical clarity with the melancholic "unreadability" of Walker Evans's photography. In the process, Tagg touches on several of the images that are dear to the Sandwichman's thought.

One of those image in particular binds Kaplan's discussion of the Gospel of Consumption much tighter to the shorter work time movement. It is a leaflet promoting the American Way billboards, which included one proudly proclaiming "World's Shortest Working Hours!" This from an organization that cranked out a steady stream of literature denouncing the "disastrous effects" and "real problem" of the "dangerous fallacy" of shorter working time. 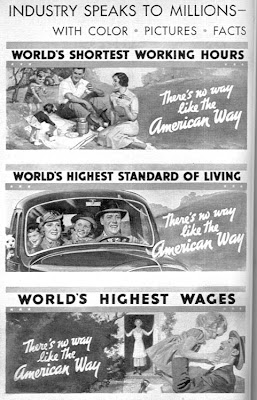 I guess it just goes to show, there's no way like the American Way!

Posted by Sandwichman at 4:57 PM

In 'The Gospel of Consumption' the article says: "...But despite the apparent tidal wave of new consumer goods and what appeared to be a healthy appetite for their consumption among the well-to-do, industrialists were worried. They feared that the frugal habits maintained by most American families would be difficult to break. Perhaps even more threatening was the fact that the industrial capacity for turning out goods seemed to be increasing at a pace greater than people’s sense that they needed them. It was this latter concern that led Charles Kettering, director of General Motors Research, to write a 1929 magazine article called “Keep the Consumer Dissatisfied.” He wasn’t suggesting that manufacturers produce shoddy products. Along with many of his corporate cohorts, he was defining a strategic shift for American industry—from fulfilling basic human needs to creating new ones…”

I can't agree with that. Industrial production was rarely about the fulfillment of basic human needs. The destruction of 'the commons' makes it clear also that the creation of new, artificial, needs has always been necessary to sustain an industrial and commercial regime based on profit for the few.

I don't suppose the author was thinking so much about the positive assertion as he was about the rhetorical contrast, Brenda.

Sandwichman, I take your point. Nevertheless I will continue to be (sometimes irritatingly) pedantic

I will point out the innacuracies that have been hidden to serve the cause of 'rhetorical contrast' in the hope that this clarification may benefit those readers that are somewhat less informed than yourself.

Our schools teach the morality of feudalism corrupted by commercialism, and hold up the military conqueror, the robber baron, and the profiteer, as models of the illustrious and successful.
GB Shaw

How was the so-called 'Green Revolution' [toxic pesticides, wasteful irrigation, reduction of the gene pool through monoculture and reductionist breeding] promoted?

1969 – New institutions established to promote the new form of industrialized agriculture.
"A host of new institutions were established to provide the research required to develop further the Green Revolution, to disseminate the seeds, and to educate people in the appropriate agricultural techniques. By 1969, the Rockefeller Foundation, in co-operation with the Ford Foundation, had established the Centro International de Agriculture Tropical (CIAT) in Colombia and the International Institute for Tropical Agriculture (IITA) in Nigeria."

“..In 197 1, at the initiative of Robert McNamara, the President of the World Bank, the Consultative Group on International Agricultural Research (CGIAR) was formed to finance the growing network of international agricultural centres (IARCs). Since 1971, nine more IARCs have been added to the CGIAR system. Over the last two decades, FAO has played a key role in promoting the Green Revolution package of “improved” seeds, agrochemicals and irrigation schemes…”

Source:
The Green Revolution in the Punjab
By Vandana Shiva
From The Ecologist, Vol. 21, No. 2, March-April 1991 reproduced by permission of the Editor
http://livingheritage.org/green-revolution.htm