US Economy is Not Suffering from Underconsumption 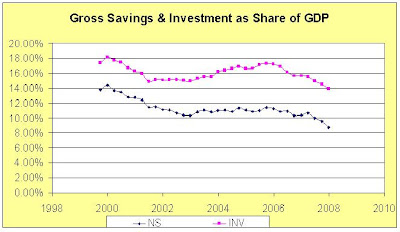 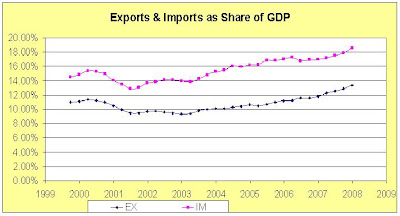 Robert Reich wants a more equitable distribution of after-tax income and so I do but to blame weak aggregate demand on a lack of consumption is odd as Paul Krugman notes:

But how, exactly, do you reconcile this assertion with the fact that we have a negative savings rate, and that consumption is at a near-record share of national income?

Paul wrote this even before the BEA’s release of the 2008QII data, while my graphs include them. James Hamilton has a nice summary of the latest BEA information:

The main reason that the final GDP number was weaker than predicted was the big drawdown in inventories. Without that negative contribution from inventories, real final sales grew at a robust 3.8% annual rate. Housing subtracted 0.6% from the annual real GDP growth rate, though that's actually the smallest negative contribution we've seen in a year. Remember that new home construction has to be worse (on a seasonally adjusted basis) than it was the previous quarter in order to make a negative contribution to the GDP growth rate. Bigger exports and smaller imports each boosted the GDP growth rate by over 1%. Complain as you like about the Fed permitting such a big slide in the dollar, but at least it's having the intended effect on aggregate demand through the international channel. Without the gains on net exports, real GDP would have actually fallen, making one worry about recent indications of a global economic slowdown. Real personal consumption spending also grew, though less than I had been expecting, given the presumed stimulus from the tax rebate.

Just as the 2001 recession was an investment led slump, investment demand as a share of GDP is also on the decline. The consumption/GDP ratio was 71.16% last quarter, while government purchases relative to GDP were 20.13%. These figures compare to the figures for 2000QII where consumption/GDP was 68.09% and government purchases/GDP was 17.51%. In other words, the gross national savings/GDP ratio fell from 14.4% to only 8.72%. If we assume that depreciation represents about 10% of GDP, then we do have a negative savings rate with what little net investment we are seeing being financed by a large current account deficit.

Many economists – including myself – have noted that exports are growing relative to GDP. We should note, however, that the import/GDP ratio has been rising as well. While dollar devaluation may indeed encouraging more exports, we are not going to reduce the current account deficit as long as national savings remains below what little net investment we have.
Posted by ProGrowthLiberal at 2:01 PM