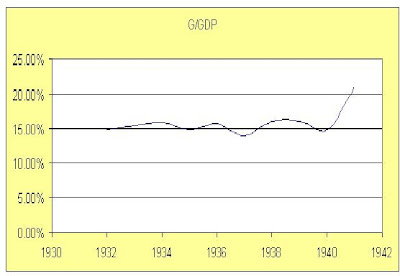 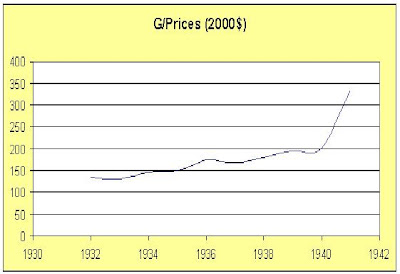 Let’s return to the discussion of New Deal economics, that is the role of fiscal policy during the first two FDR administrations and look at the discussion from Alex Tabarrok:

Thus, an accurate portrayal of fiscal policy during the Great Depression - entirely consistent with Krugman - is that we had much greater spending, much greater taxes and not much economic stimulus.

To be fair, Marmico’s graph shows only a subset of Federal tax revenues as a share of GDP so I have added a graph of total government revenue (Rev) relative to GDP. 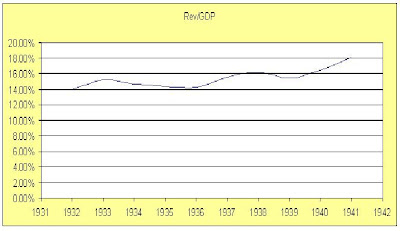 Posted by ProGrowthLiberal at 11:50 AM

Here from HSUS is Federal Spending by year - note by 1934 spending had more than doubled in nominal terms.

Here is real spending which takes into account the fact that prices were falling. The increase is even more striking.

Note that this not controversial, everyone on left and right agrees spending increased a lot.

Alex - given that the difference between spending and purchases is transfer payments, it seems safe to say that transfers increased during the 1930's. Marmico was challenging the presumption that taxes rose substantially. While his graph was less than complete, my graph (in the update) shows total government revenues per BEA.

Looking over more of the BEA data v. what Alex presents in his comment, four observations:

(1) The movement in total transfer payments isn't really that large

(4) But finally - state and local spending did not rise under Hoover, which begs the question - why is Alex focused on Federal spending and not total government spending in his comment?

We could (maybe should) present total government spending (in honor of Marmico's comment, we did present total revenue) as shares of GDP during FDR's 1st two terms but I don't think that would radically change the point. To say this was some massive experiment in increasing both G and T (ala the balanced budget multiplier perhaps) doesn't square with at least my read of the data.

The issue is that Tabarrok conflated raising marginal tax rates (which Hoover did incidentally)from a Carpe Diem chart (which Mankiw has now blogged) with much greater taxes.

Smoot-Hawley raised federal government revenues as a percentage of GDP, not individual or corporate tax receipts.

From the same source, total federal + state government revenues as a percent of GDP are here.

Another dataset for perspective. Total federal government spending as a percentage of GDP HERE. The raw data is relatively meaningless.

Please note that the deficit as a percentage of GDP was higher in 1983 than in 1934. The 2009 deficit will smoke both and we will be back to the Truman era with the debt/GDP ratio.

Marmico - thanks for reminding us that the Economic Report of the President has this dataset showing Federal expenditures and revenues as a percent of GDP. I guess Alex would note the increase (from a low percentage) in expenditures up to 1932 while I would note the relatively flat level for the FDR period before 1941. As I noted earlier, Alex's series like this one focused on Federal spending not total government spending.

Looking at total government spending or revenue as a percentage of GDP seems to be rather silly. There is a somewhat direct correlation between government spending and GDP -- As government spends the GDP rises. Using one to measure the other doesn't really tell you much. This is also true when speaking of taxation and not actually talking about _WHAT_ is being taxed. When the proceeds of a tax on economic rent are used to increase actual capital development and wages then the economic result is a prosperous economy. If you tax wages below $100k and use the money for foreign military adventures then prosperity suffers.

Tax increases in the 30's were tax increases on economic rent. Government did not spend ENOUGH on transfer payments and infrastructure. The "NEW DEAL" was simply insufficient.