Tyler Cowen on Investment During the 1930’s 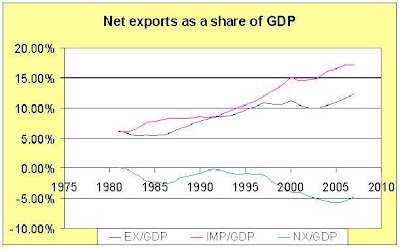 Tyler Cowen has been busy opining on macroeconomic policy during the 1930’s including a November 23rd NYTimes oped critiqued by Econoclast but let us turn attention to Tyler’s critique of what Brad DeLong had to contribute. While I am grateful that Tyler pointed out my graph of net investment, I’m puzzled by this:

Only in 1941 did net investment exceed its 1929 level. Here's a chart which seems consistent with these claims and which shows the difference between the net and the gross series for investment. The waves are very similar but at different absolute levels. Can any readers explain what is going on In this time period, using this data, is net or gross investment a better indicator of recovery and economic conditions? Is the pro-New Deal claim that making net investment "less negative" (but still negative) counts as a success or rather that the gross investment series is what matters?

Whether one uses gross investment as Brad did – or net investment as I did (given the George Will tirade) – the measured increase in investment demand was roughly the same. So Tyler’s first question seems silly from a Keynesian perspective, while the answer to his second question is YES.

One might be wondering why I choose to graph exports (EX) minus imports (IM) as a share of GDP (all series in real terms) for the more recent years in a post about net investment during the 1930’s, but this is by way of an analogy. We have had negative net exports (NX) for quite a long time but we are not shy about saying how an increase in export demand had been fueling economic recovery until recently. So I do not see anything odd about Brad showing us gross investment without including the depreciation chart.

Now if Tyler wants to lament that the capital stock fell during the 1930’s, he has a point but a very different point. Incidentally, the net financial wealth of the U.S. has also been eroding during this prolonged period of current account deficits.
Posted by ProGrowthLiberal at 2:15 PM

isn't the horizontal axis in the graph wrong?
Jim Devine

It would be helpful IMHO to have a breakdown of what the 'investment' was composed of. Because there is a screaming need in these days of catastrophic breakdown in the economy and biosphere to differentiate between 'economic' and 'uneconomic' forms of growth.

It would seem to a casual observer that the 'investment' that occurred during World War II - on guns, and bombs and armies - was actually not investment at all. Neither was the 'investment' in the 1920s that was composed of speculative currency plays around the globe.

Actually I would go so far as to question the very basis of the extraordinary focus on export-driven growth in consumer products as a model for economic development and 'investment' generally. How economic is it to leave billions of people hungry and/or living in shanty towns without adequate sanitation whilst a minority get to play with more gadgets.

...…securitization of credit. Some people think this is a recent innovation, but in fact it was the core technique that made possible the dangerous practices of the 1920s. Banks would originate and repackage highly speculative loans, market them as securities through their retail networks, using the prestigious brand name of the bank -- e.g. Morgan or Chase -- as a proxy for the soundness of the security. It was this practice, and the ensuing collapse when so much of the paper went bad, that led Congress to enact the Glass-Steagall Act, requiring bankers to decide either to be commercial banks -- part of the monetary system, closely supervised and subject to reserve requirements, given deposit insurance, and access to the Fed's discount window; or investment banks that were not government guaranteed, but that were soon subjected to an extensive disclosure regime under the SEC. Since repeal of Glass Steagall in 1999, after more than a decade of de facto inroads, super-banks have been able to re-enact the same kinds of structural conflicts of interest that were endemic in the 1920s -- lending to speculators, packaging and securitizing credits and then selling them off, wholesale or retail, and extracting fees at every step along the way. And, much of this paper is even more opaque to bank examiners than its counterparts were in the 1920s. Much of it isn't paper at all, and the whole process is supercharged by computers and automated formulas. An independent source of instability is that while these credit derivatives are said to increase liquidity and serve as shock absorbers, in fact their bets are often in the same direction – assuming perpetually rising asset prices -- so in a credit crisis they can act as net de-stabilizers. A third parallel is the excessive use of leverage....

'The Alarming Parallels Between 1929 and 2007'. Testimony of Robert Kuttner Before the Committee on Financial Services
Rep. Barney Frank, Chairman, U.S. House of Representatives, Washington, D.C.October 2, 2007
http://www.prospect.org/cs/articles?article=the_alarming_parallels_between_1929_and_2007

Jim - actually, I did mean to compare net exports since 1981 to Tyler's (and my) net investment in the 1930's. It's only an analogy to what I considered a strange critique of Brad by Tyler.