by Sydney J. Chapman (translated and condensed by the Sandwichman)

The eight-hour day has come to be regarded by some social reformers as the ideal of the future. The doctrine that the workman should normally work eight hours a day has been advanced with as high a degree of certainty as, say, the doctrine that the workman should normally sleep some definite number of hours a day. But the problem of the length of the working day is of a different nature from that of the problem of the time that should be devoted to sleep. The hours that should be given to sleep depend mainly on physiological conditions (though these physiological conditions are also affected by economic and psychological conditions). But the hours it is wise to assign to labor depend on the attitude of the workman to leisure and work, resulting as much from non-physiological as from physiological influences.


It is my purpose to show that the non-physiological value of leisure, as well as its physiological value, must rise with progress, and that therefore, in all probability, the hours that should normally be worked per day will become steadily less. The ideal working day of the future cannot be eight hours, for it must be essentially a progressive ideal. As a community advances, agitation for shorter hours will be constantly breaking out anew. If this is a correct reading of progress, it is important that we should understand fully the forces at work at each re-settlement of the length of the working day, those on the employing side as well as those expressed in the claims of the workers. I propose now, in consequence, to disentangle the impulses and their relations, into which the question of the determination of the working day at any one time may be resolved.

The matter being complex, it is necessary to proceed by successive steps of abstraction. In the first instance, therefore, I intend to indicate the length of working day workers and employers would respectively seek if they recognized their own interests and were endowed with complete foreknowledge of the effects of different hours of labor upon their interests. I will assume – as I may legitimately for most employment in large-scale production – that the workman tends to get as his wage his marginal worth, that is to say, the value that would be lost by his dismissal. We may assume, further, that the marginal worth of the workman for any given length of working day becomes, in the long run, a stationary amount.

If the efficiency of labor rose continuously in consequence of a reduction of hours it would obviously approximate to some limit, and if it fell continuously in consequence of an extension of the hours of labor it would also approach a limit. After some time the differences between these limits and the actual efficiency of labor could be taken as negligible.

For the sake of simplicity, I will for now suppose that one kind of labor only is employed. It is clear, then, that it is possible on these assumptions to indicate what in the long run (i.e., when all the reactions as regards, for instance, the efficiency of labor and provision and arrangement of other agents have taken place) the marginal daily worth of labor will be for different lengths of working day, it being understood that the number of shifts worked remains the same. If the number of shifts were increased the value of the labor would rise, as will be fully explained later.

Let us suppose that the following table represents, at a given time, the value of labor of a given kind per week, in relation to the length of the working day: 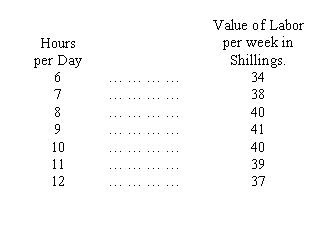 The fall in the value of labor after the working day exceeds nine hours is due to the fact that diminished weekly productivity more than counteracts the direct effect of the extension of the daily time for work. The diminished weekly productivity may be due to impaired vitality – physical, mental, or moral – or to some extent to irregularity, where that is possible, as in the case of colliers. The damage to productivity may be inflicted directly by excessive work, or it may be indirectly consequent upon it, the prime cause being found in the use of stimulants or recourse to unhealthy excitement in periods of leisure, reactions that are only to be expected when the day's work is very exhausting or very dull. The use of leisure affects, of course, mental vitality, culture, and character, and it will therefore be generally observable that labor which has had its hours reduced will be capable after a time – when the use of leisure has been improved and the improvement has produced its effects – of managing satisfactorily more complicated machinery, and will be generally more responsible and trustworthy, and therefore less in need of continuous watching and directing.

If employers are endowed with the foresight presupposed, and if their operating hours need not increase concurrently with a lengthening of the working day, it is in that case supposed to their interest collectively to come to an agreement not to employ labor more than nine hours a day, and to their interest individually not to employ labor for shorter hours than nine a day. The second conclusion follows from the fact that the weekly product would be augmented by a greater amount than is multiplied by the number of workers were the hours of labor increased, say from eight to nine, because labor, as every other agent employed in production, is paid not its aggregate but its marginal worth to the business in which it is employed. This proposition may be made more self-evident by the following example. Were labor rendered 25 percent more productive all round, the product and real wages would each be raised approximately 25 percent, other things being equal; but as the product must be greater than aggregate wages the addition made to the former by the longer hours must be greater than the addition made to aggregate wages.

Thanks, Martin. A little omission in the editing...