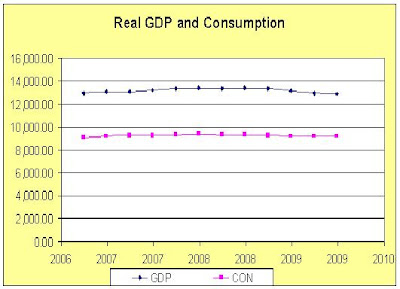 While I tend to agree with Jeff Frankel, let me play devil’s advocate:

Martin Feldstein and others predicted that the tax-cut component of the 2009 fiscal stimulus package would have substantially less expansionary bang-for-the-buck than the spending component of the package, because much of the tax cut would be saved, as had been the case with the 2008 tax cut. (“Bang for the buck” in this case could be defined as demand stimulus divided by budget cost.) We knew this from Milton Friedman’s permanent income hypothesis, or even from good old Keynesian multiplier theory.

Actually, the Econ 101 version of Keynesian multiplier theory might tell you that most but not all of the tax cut would be consumed with a little bit going to savings but Martin Feldstein was capturing what the permanent income hypothesis would predict from a temporary tax cut:

Recent government statistics show that only between 10% and 20% of the rebate dollars were spent. The rebates added nearly $80 billion to the permanent national debt but less than $20 billion to consumer spending.

In other words, the claim is that most of the 2008 tax rebate was saved with very little of it being consumed. Feldstein argues that the same low bang for the buck effect is occurring with the tax cut portion of the 2009 fiscal stimulus.

Gary Burtless is not so sure this is quite right:

Before the recession began, American households saved very little. The personal saving rate was just 1.5% in late 2007. As the recession worsened, the saving rate soared. In the most recent quarter, it reached 5.2%. Critics of the government’s stimulus policies claim the surge in personal saving has undone the intended effects of the stimulus. In their view, the government’s efforts to boost the economy have failed. Is this claim credible? The last business cycle expansion reached a peak in the end of 2007. Since that time, the number of payroll jobs has shrunk without interruption and total U.S. output has fallen 3.7%. The drop in private personal income was even faster. It fell 4.4% in the six quarters after the end of 2007, a decline of more than $500 billion at an annual rate. At the same time, the net worth of American households fell more than $12 trillion, or about one-fifth. In the face of the sharp fall in private income and steep dive in household net worth, personal consumption expenditures fell just 2% from the beginning of the recession through the second quarter of 2009. One reason the drop in personal consumption was so small was the massive swing in household tax liabilities and government transfer payments. This swing was partly the result of two stimulus packages passed in 2008 and 2009 … The notion that the stimulus package failed is based on a very unrealistic benchmark. An assumption of stimulus critics seems to be that for the package to succeed, household consumption must remain constant or even rise in the face of sharply lower private incomes and household wealth. How realistic is this expectation? Not very. My interpretation is that the massive swing in taxes and government transfer payments, produced in part by the stimulus packages, moderated the fall in household consumption that would otherwise have occurred. The stimulus packages did not end the recession, but they reduced its severity.

The argument is that the consumption schedule shifted downwards due to a decline in wealth and the tax cuts did induce a movement along the new lower consumption schedule with a larger bang for the buck than Feldstein and Frankel are suggesting. Our graph shows both real GDP and real consumption from 2006QIII to 2009QII. While both series rose for a few quarters, both series have been declining since the end of 2007 with the net change in both being close to zero. With a reduction in taxes, after-tax income has increased but consumption has not. How much of this disappointing news is due to a low marginal propensity to consume for the tax rebates versus a wealth-induced downward shift of the consumption schedule appears to be open to debate.

Not open to debate in my opinion was the need for fiscal stimulus – and many economists think we still need more fiscal stimulus. And Jeff’s general point is still valid:

if it is short-term demand stimulus we are after, and we are, then government spending gives more bang for the buck than tax cuts.

Posted by ProGrowthLiberal at 10:15 AM

I may be off base here but it seems at least among people I know, the reduction in tax withholding was followed by a 10% cut in gross pay. This generally cut across different industries and jobs. Just can't spend what you never got/