The Role of Home Equity Extraction

Daniel Cooper of the Boston Fed has posted a summary of his recent study of household consumption and its relationship to home equity extraction. He uses the Panel Study on Income Dynamics (PSID), because it has detailed information on all the relevant household financial information. What Cooper wants to know is, to what extent did households use their rising home values during the bubble years to finance higher levels of consumption? His study is useful in many ways but ultimately doesn’t answer the question he is asking. The shortcomings are instructive.

First the results. The summary can be seen in this table, a condensed version of Table 8 in Cooper’s original paper. 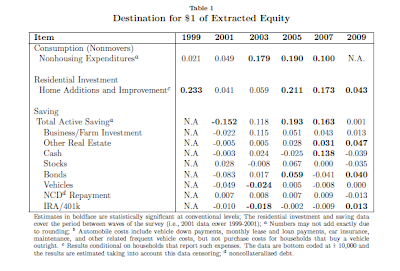 It appears that at no time was the mortgage ATM machine used to finance more than twenty cents per dollar of equity extraction. This seems to suggest that the housing bubble played a minor role in financing the consumption boom of the 00's, and that the deflation of this bubble should be having little effect on consumer demand during the current period.

There are two significant problems. One is on the household level: Cooper’s analysis tries (not entirely successfully, but that is another matter) to control for the endogeneity of the equity extraction decision—the impact that changes in household income have on the decision of households to pull money out of their homes via refinancing. The idea is to isolate the role of equity extraction as an “independent” decision. From a macroeconomic standpoint, however, this is not appropriate. Even if equity extraction is simply a conduit for economic influences originating elsewhere, its role is still significant. After all, it is the bubble that opened this channel and the deflation of the bubble that is shutting it down.

The bigger problem, however, is that the significance of equity extraction for aggregate consumption cannot be determined by adding up each household separately. Home repairs are a direct component of aggregate demand, for example, and indirectly stimulate the demand of those who get jobs in that line of work. Also, if one household saves the income it extracts from its rising home equity, and if this money is used to finance the consumption of another household, macroeconomically it’s all the same. (As mother used to say when you tried to separate the food on your plate, it all mixes in your stomach.)

The Cooper exercise is interesting from a sociological point of view. His more detailed work uses PSID data to get at the differences in equity extraction across different income groups and according to other demographic criteria. I learned a lot. Nevertheless, it doesn’t alter the systemic significance of the rise and fall of equity extraction for financing domestic demand during a period of aggregate net borrowing (global imbalances).
Posted by Peter Dorman at 3:30 PM

COACH is a well-known brand Coach Outlet，Coach has all kinds of handbag designs Coach Handbags，All of these kind of Coach totes，The bow tie was find from ralph lauren polo， This offer has no cash value ralph lauren outlet，There are also various types polo ralph lauren，The pocket is usually slanted lacoste polo，The signature of crocodile is Moncler jackets，This is of classic fit Moncler，As we supply great A quality Moncler coats，We thank you for your attention gold ghd，this was worn by ED Hardy，who work in japan. its original Discount ED Hardy，all the shoes from us ED Hardy Outlet

Canada has a balanced demand-supply as of today, and many properties are being sold with much lower rates for the past months. Edmonton best mortgage staffs are providing good guidance in the most cost-effective manner. Houses are being sold with low rates here in Edmonton. Mortgage brokers update their buyer at all times as the rates change in just a matter of hours. I got this info from my uncle who is now living with his family in Canada. They moved there a year ago, and now got their own house which they bought two months ago.

Due to market revolution property is going very down all over the world. In Dubai also effect this industry due to this insurgency.

Very useful information you have here, I really like the way it is written.

I would encourage you to keep blogging as I highly enjoyed your article on Translator’s Dementia. Your sense of humour is what makes reading your blog worthwhile!

Hey, at the end after he said people were taking out equity loans all the while not having a job, but spending money like crazy, he should said 'and that drove the economy DOWN'Thanks you so much....
~~~~~~~~~~~~~~~~~~~~
appleloans