A question (to which I don’t have the full answer): why are the interest rates on Italian and Japanese debt so different? As of right now, 10-year Japanese bonds are yielding 1.09%; 10-year Italian bonds 5.76%.

The short answer has to be that Italy is a deficit country, and Japan is a surplus country. To wit: 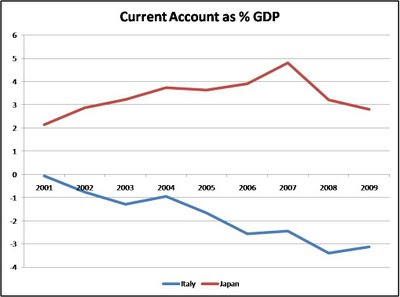 Invoke the macro identity: the current account equals the sum of private and public net saving. Japan is a net saving country; the savings of its households and firms exceeds the borrowing of its government. As long as Japanese savers and financial institutions are willing to stockpile Japanese bonds, interest rates will remain low. This willingness results not only from general financial sentiment, but also institutional linkages between public and private institutions, which are commingled at a deep level.

In short, capital is not yet borderless. It is easier to borrow domestically than from abroad. Japan and Italy are on different sides of the current account divide.
Posted by Peter Dorman at 2:18 AM