Whose Responsibility Is it that the Public Doesn’t Understand Public Finance?

While education wonks debate microscopic movements in the NAEP and other standardized measurements of student learning, those of us who care about the capacity of democracy in the modern world face data like this
: 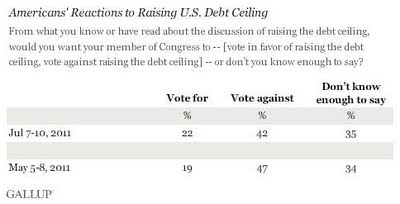 Obviously, a great majority of the American people lack the elementary knowledge of government budgets to formulate a sensible answer—and, yes, there is only one sensible answer.There are at least three things they apparently fail to understand:

1. An increase in the debt ceiling simply follows through on the revenue and spending commitments that Congress has already made. Not raising it is like check kiting.

2. The only way the debt can fail to rise each and every year is if the government runs a budget surplus. Such a surplus is impossible this year, all but impossible for the next several, and has been a rare event not only in the US, but in every other modern economy. Moreover, there is no theoretical reason why such surpluses should be the norm, and many why moderate, intelligently directed borrowing should be.

3. Failure to raise the debt ceiling would lead to an immediate economic calamity. US Treasury bonds play a crucial role in the national and world economies, and all of us depend, directly or indirectly, on the income people get from government employment and social programs.

But there’s no point in complaining. The question is, how did we get into this political mess, and how can we get out of it? Real answers depend on real data, but in the meantime here are some speculations:

1. There is no functioning incentive in the media (print and electronic) from which most people get their information to be factually correct. Whether to portray the world as it actually is or make stuff up is a choice, and those who go for option #2 suffer no ill effects. Hence there is a vast amount of misinformation out there. The solution is not government regulation of the media, but a societal effort to build incentives for journalistic integrity. For instance, professional associations could not only give awards for exceptional service, but also black marks for incompetence and deceit. Teams of journalists could noncoercively “accredit” news outlets (including megablogs) the way colleges and universities are accredited, through an open process with transparent criteria.

2. Economists have collectively taken little responsibility for public education. For instance, I know of no attempts to identify the critical gaps in the public’s understanding of economics in order to mobilize a response. Even in the obvious places, like introductory textbooks, there is no systematic attempt to address economic illiteracy. If you think I’m exaggerating, show me the textbooks that speak to the three elementary observations made above—that make it clear that public debts are rarely capped, much less “repaid”, and that these debts are also economically vital assets.

3. There is a deep cognitive dimension to economic illiteracy. The term “national debt” is perceived by most people to be ominous and threatening, especially when numbers in the trillions are thrown around. They think governments are like households, going on consumption binges and waking up to debt bondage. In other words, they have a one-way view of causation, beginning with one’s own economic choices and leading to debt, and cannot see the other, from debt choices made by the government back to the economy, since each individual household’s insertion into the economy (their frame of reference) has only the first dimension. In addition, they see their own debts only from the liability side and not from the asset side. In other words, they are applying a personal, household template to the systemic terrain that economics is supposed to illuminate. Without getting more specific, all I can say is that a defective frame can be countered only by a better one: we need a coordinated effort to popularize a framework for visualizing the economy that is also based on us as a community, not just me as an atom.

4. The first three of these causal factors are exploited and amplified by a wealthy and politically powerful business-conservative coalition. They bankroll media that cynically make stuff up, and where none exist they create them. They reward economists who twist evidence and invent fanciful models that just happen to justify misinformation and cognitive errors regarding the real-world economy. And of course they make constant reference to images and framing devices that reinforce the inability of the public to think clearly about economic choices. Their political strategy is predicated on mass ignorance and error, so any movement for rationality and honesty has to be political as well.
Posted by Peter Dorman at 3:35 AM

there was a whole big show along these lines the other day. baby steps, but starting with "lie #1: america is not broke." http://rebuildthedream.com

Economists who would twist evidemce if you paid them enough? Not to be crude but don't most states make prostitution illegal? At least prostitutes are honest how they make a buck.

Perhaps a LATER poll would be more informative:

Does anybody have any thoughts on this: http://factsandotherstubbornthings.blogspot.com/2011/07/communicating-difference-between-public.html??

I think a big part of the problem is that we don't have a succinct way to respond to analogizing to family budgets.

But the point remains that governments are not in business to make a profit nor to promote the properly self centered interests of a family in relation to other families.