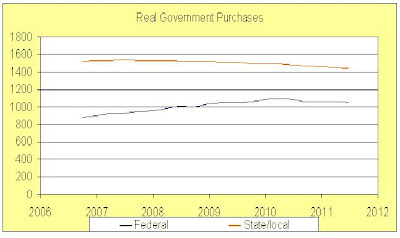 Assuming a picture is worth a thousand words, our graph is offered as an illustration of some wise words from Mark Thoma:

We need a temporary increase in government spending to increase demand and employment through, for example, building infrastructure. That would help to get us out of the deep hole we are in. Instead, the government seems to be trying to make it harder to escape. We do need to address our long-run budget problems once the economy is healthy enough to withstand the tax increases and program cuts that will be required. But the idea of "expansionary" austerity has failed.

Real government purchases fell by almost $30 billion (annualized) last year with $20 billion of this decline shockingly coming from Federal purchases. While it is true that state & local purchases have been declining since late 2007 with the cumulative decline exceeding $90 billion per year, we have also seen a significant decline in Federal purchases over the past year. We should add that Keynesian macroeconomists have always worried about the implications those state & local balanced budget requirements, which force this kind of perverse fiscal reaction to recessions. But as Barkley Rosser noted over at Mark’s blog:

Is it not the case that the main source of this outright decline in G is coming from the state and local levels with their balanced current budget rules, along with the ending of fed stim support for them? Of course, this suggests that the easiest way to offset this would be renewed support by the feds for the states and locals, but obviously this is unlikely to happen in the near future.

Federal revenue sharing should be increased but then the leaders of the Republican Party seem hell bent on balancing even the Federal budget during this Great Recession.
Posted by ProGrowthLiberal at 11:25 AM

At least the GDP is still increasing.
In an interesting article entitled the GDP Deception published recently on financialsense, the author states that GDP is money supply times money velocity.
The money velocity has decreased from 10 years ago from 2.0 to 1.6.
If the money supply had stayed the same, the GDP would have decreased. But thanks to increasing government debt, which increases the money supply, our GDP has grown!
Don Levit