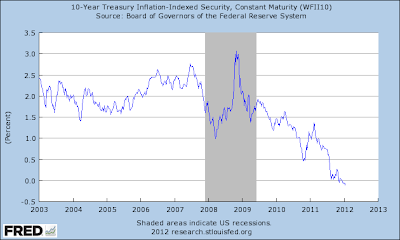 Brad DeLong constructs a real interest rate series for the past 50 years using the nominal rate on 10-year government bonds minus inflation. Our graph is based on TIPS which limits us to the past few years. Brad notes:

If You Think That the Equilibrium Real Ten-Year Treasury Rate Is 2.5%/Year...as you might conclude from the historical track of the past fifty years: then the current 10-year Treasury rate of 1.87%/year is consistent with market expectations of deflation at an average rate of 0.63%/year over the next decade. If you think that the market's forecast of the equilibrium Treasury real rate over the next decade will be much less than 2.5%/year--as the real TIPS rate of -0.185/year suggests--then it seems likely that it is because the market expects a high unemployment rate for the next decade. Neither possibility seems consistent with market expectations of a Federal Reserve that understands its mission

I’m puzzled by the behavior of the real rate during the most recent recession period. At first, this real rate dropped from nearly 2.5% (August 2007) observed before the recession to around 1% (March 2010) as one would have hoped from Federal Reserve policies designed to offset the recession. But by October 2010, the real rate increased to 3%. I realize that this was the period when fiscal policy was trying to revive the weak economy but given the depth of the Great Recession, but most of us thought the fiscal stimulus was too weak to get us even remotely close to full employment.

But let’s also look at the early 1980’s, which was a period when fiscal policy turned stimulative for whatever reason. Some defenders of the Reagan tax cut might have argued we were in a deep recession then as well, while others justified that tax cut on supply-side silliness. Of course, macroeconomic history tells us that the Volcker Federal Reserve was hell bent on combating inflation and decided to offset the Reagan tax cuts with a period of tight monetary policy, which led to much higher real interest rates crowding-out investment. Not exactly the parable that the supply-side crowd likes to tell. But then there has always been a third school of economists who preach Barro-Ricardian equivalence. Their message – as best exemplified by “Do Higher Deficits Produce Higher Interest Rates” by Paul Evans (AER, 1985) – was that households would save all of the tax cuts so that there would be no impact on national savings and hence no effect on interest rates. That prediction was clearly not borne out by the evidence as Brad’s graph clearly shows. The good news is that we finally recovered from the 1982 recession as Federal Reserve policy eventually reversed its draconian contraction and allowed real rates to fall from their peak.
Posted by ProGrowthLiberal at 10:33 AM