BLS just released its preliminary December figure for job openings (from its Job Openings and Labor Turnover Survey—JOLTS), and the news is good: 258,000 more vacancies.  Combined with previously reported unemployment data, the unemployment to vacancy ratio dipped noticeably from 4.3 to 3.9.  Here is how the ratio looks from the beginning of 2008 to the end of 2011: 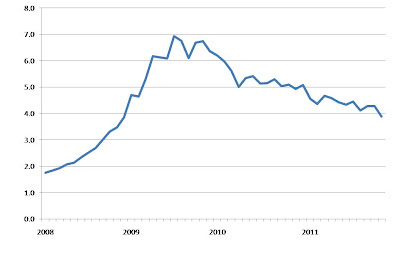 If the decline keeps to the trend it has established since the cyclical peak of 6.9 of July 2009, in another 18 months we’ll be back down to two workers looking for work for every job opening.  This is still above the ratio most economists would prefer (about one-and-a-half to one), but it’s not bad.  There is a big proviso, however: the unemployment numbers do not count the large number of workers who have apparently withdrawn from the (pathetic) labor market.  And, of course, there is no guarantee at all that this trend will stay on course.

empop seems to give the same results. Real improvement, not sufficient to end most of the unemployeds pain or put upward pressure on wages - a long time at this rate for employment to reach 2007 levels.

And 2007 real employment was not that fabulous.

Not that it wouldn't have dropped, but it's a lot easier to show a decline in the ratio when the numerator falls precipitously.

How has BLS avoided becoming corrupted by party factionalism? I hear it has a good rep for being even-handed...

I wonder if these numbers will be revised? Just like all the other economic indicators. I would really like to know what jobs and where? Walmart? I have seen no evidence of any jobs. Staples actually asks for a resume for a minimum wage job. I call bullshit on their numbers. How in the hell can anything make sense when millions of people have given up looking for a job, so they aren't even counted.

Just to make it clear where I’m coming from, I don't think any single number fully describes the state of the labor market. Certainly the employment rate is important, since it captures dropouts. But then, not all dropouts are created equal, so maybe U-6 (the most expansive definition of the unemployment rate) is worth a look. And unemployed (U-3, actively seeking work) to job vacancies gives a sense of Marx's "reserve army of labor" and therefore the pressure on job applicants to agree to work for less. It is the closest analogue to supply and demand that we have. I posted the new ratio because I think it should be considered, along with the other numbers, which are less favorable.

As for whether the number will be revised, it is in fact preliminary, so don’t go dancing in the streets just yet. But BLS is an honorable outfit. In a better world, those who do primary data collection would be honored, and those who sit on their duff and speculate all day (a.k.a. “theorists”) would be on the sidelines, except for the very few whose speculations really change how we think about the world.

This ratio could continue to adopt if President Obama decides to implement a recent proposal from Newt - start spending a lot of public funds to further explore space! I know - we should be increasing government purchases on other things like schools and bridges but let's go with something a Republican proposed on the hope they'll let it get through Congress!

That's a great idea, pgl! Even better, we could fill bottles with dollar bills, put them on a rocket to Mars, and then send fearless astronauts to bring the bottles back and collect the money.

We should check the Republican platform after Newt is nominated (Romney seems to be dropping like a stone) for all its Star Wars Keynesian proposals! May the Force be with you!

"let's go with something a Republican proposed on the hope they'll let it get through Congress!"