Readers of EconoSpeak with very good memories may recall that I raised this issue in late 07/early 08 (see here and here).  Now Karl Smith has again pointed out the connection between US current account deficits and its housing bubble.  His FREDgraph is intriguing: 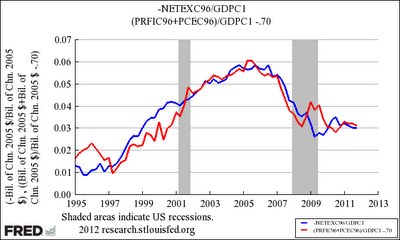 Two words of caution, however.  First, the trade balance in this graph is net, while residential consumption is gross.  In reality, the capital inflows that financed our trade deficit were apportioned between housing and other loci of borrowing.  Second and far more important, it is dubious to assume, with Smith (and Bernanke and Obstfeld), that the primary direction of causality was from differential savings propensities (low in the US, high in China) to trade imbalances, when it was the other way around.  As far as I know, no one has ever rebutted the argument I made in Challenge five years ago.  If it’s right, trade is primary.
Posted by Peter Dorman at 1:49 AM

One of the most complex and significant financial events in peoples' lives is the purchase or sale of a home or investment property. it is really important to ask for advice from realtors and attorneys when planning to buy a real estate.