The ability to be publicly, unashamedly dishonest is a great attribute.  Most of us just assume that others will either be honest or will at least show embarrassment and remorse if they are unmasked.  The few who are entirely without scruples, who don’t care whether others can see through their dishonesty or not, possess the key to power, since the normal constraints don’t work on them.  They can go on doing and saying whatever they like until someone forcibly stops them.  Have you noticed that a lot of politicians fit this description?

One who apparently follows this path is Mario Draghi, head of the ECB.  We have it from Andrew Watt that il Draghi gave a presentation last week whose purpose was to show that the reason half the Eurozone is staring at a fiscal precipice is that they have been indulging their workers, giving them pay raises not justified by their productivity.  Only “structural reforms” that clamp down on the pampered proletariat will do the job, he suggested.

The money graphic was this, which I have cribbed from Watt (and for which many thanks): 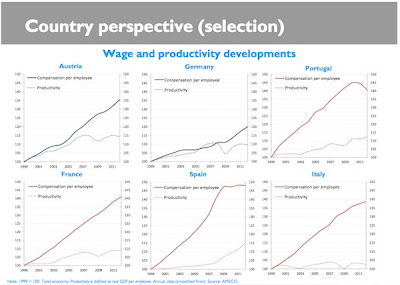 What does it seem to show?  Portugal, France, Spain and Italy have runaway labor costs that have made them uncompetitive and are the source of their sorrows.  Austria was doing fine until the financial crisis arrived and has suffered a reduction in discipline since.  Only Germany is well behaved.  According to news reports, Hollande attended this presentation and was struck dumb, unable to respond, as if such numbers couldn’t lie.

Of course they can, and it’s all very simple.  Productivity is measured in these graphs in real terms, the market value of output per worker adjusted for changes in the price level, while compensation is nominal.  Thus, a “normal” country in which wages are growing at the rate of productivity growth should show a gap between these two curves, and that pillar of rectitude, Germany, has long repressed wages below productivity growth, with drastic effects on inequality as well as price-cutting.  In the distorted world of these statistics, “reform” means taking measures that will reduce labor’s share of the pie, as it has in Germany.

So what do you think?  Is Draghi, who lives and breathes spreadsheets, aware of the subterfuge?  And, for extra credit, do you think he cares whether this obvious fudge is found out?  Will he apologize or retract anything?

Depending on your ranking of fools and knaves, Hollande does not come off very well either.  How can the president of a country not know the difference between real and nominal data, or that there has not in fact been a massive shift in income from capital to labor?

"They can go on doing and saying whatever they like until someone forcibly stops them."

And how do you propose to do that, Peter? Not that I disagree, mind you.

Wow - his graphs are akin to Jerry Bowyer's Buzz Charts. Even the National Review ceased to let Bowyer put up his dishonest charts. So maybe Jerry went to work for Draghi!

Good catch! My cynical view is that Draghi knew the graph was purposefully misleading and will only apologize if he believes that action is politically worthwhile (though he would never acknowledge knowing in advance).

I was asked by a friend
if anyone knew of a corrected version of the graphs (I am not sure why, though it might have a certain pedagogical value to compare and contrast)

The graphs are accurate and do convey the correct trends.