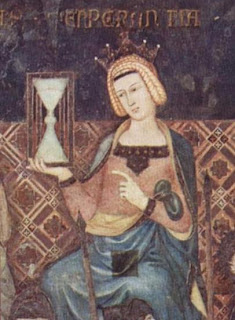 A few years ago, the Sandwichman started wondering why nobody paid attention to the energy intensity of employment. People talk about "decoupling" GDP from energy consumption but not about decoupling work. I guess the explanation for that is that there are no half-full hourglasses there to crow about -- they're all more than half empty and getting emptier.

Just yesterday I was headed to work and thinking about social accounting when the idea struck me of a "cap and trade" for hours of work. Without getting too pedantic the basic idea would be to set some aggregate "lump of labor" target, divide that figure by the adult population and then allocate the resulting number of hours credits to each adult.

Voila! Full employment! People who didn't want to work so many hours -- or at all -- could sell their hour credits to workaholics and so on. No need for a minimum wage because the price of the hour credits would set a floor for wages. Who would want to work for less than they could get by selling their hours credits to some high-paid person?

What would be the point? Getting back to the matter of the energy intensity of employment, the data show very little improvement for the U.S. over the last 30 years or so. Globally, the energy intensity of employment in 2006 was about 5% higher than it was in 1980. That means it takes about 5% more energy to power each job and of course the number of jobs has to increase roughly proportional to population. So things are not improving relatively, they're getting worse faster.

In terms of greenhouse gases, there has been a modest improvement in the U.S. over the last 20 years in emissions per hour of work. If I may put it crudely, in 2011, the average worker emitted about a ton of GHGs per week compared to about 1.12 tons in 1990. Of course the workers didn't emit the GHGs but when you look at the historical relationship between hours and emissions it's easy to get that impression. There is a very strong correlation between hours of work and GHG emission -- stronger than the correlation between population, labor force or GDP and emissions. Here's a little chart I cobbled together to illustrate: 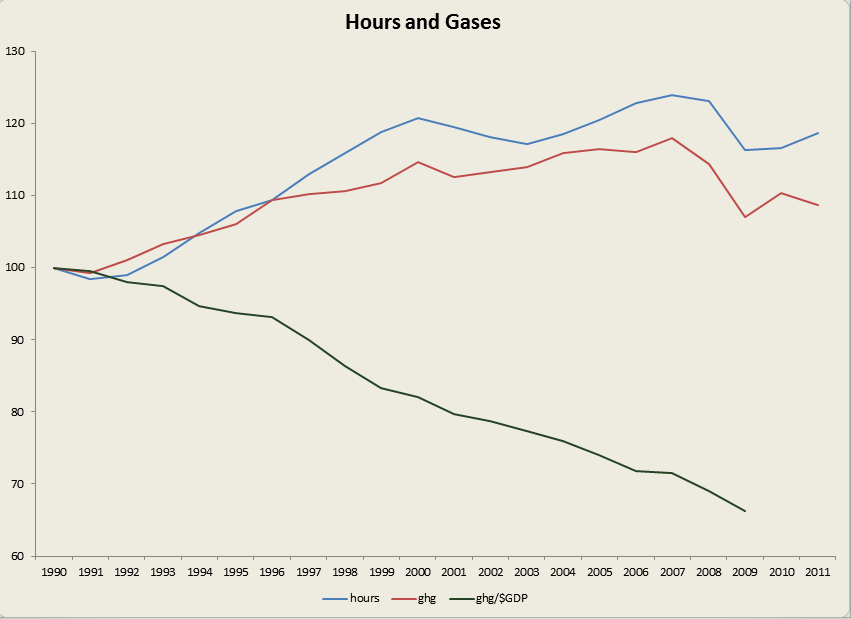 What I see when I look at that picture is a red line (GHG emissions) that is more strongly attracted upward by the blue line (aggregate hours of work) than downward by the green line of emissions per dollar of GDP. In fact, I don't think it would be going out on a limb to say that greenhouse gas emissions are virtually yoked to hours of work.

David Rosnick of the Center for Economic Policy and Research wrote a report last month on Reduced Work Hours as a Means of Slowing Climate Change. David mentions the difficulty of reducing work hours "in an economy where inequality is high and/or growing." In his paper, he assumes that "the gains from productivity growth will be more broadly shared in the future..." and envisions taking more of those productivity gains as leisure rather than as increased consumption. He also, of course, assumes that there will be productivity gains to be taken as leisure.

Although I would agree with David's intention, his assumptions are wishful thinking. During World War II, the U.S. government rationed consumer goods. There is nothing unprecedented about the idea of rationing the privilege of emitting greenhouse gases into the atmosphere. It's  just commons sense.
Posted by Sandwichman at 9:57 PM