Climate Misconception #10: To set the proper climate policy we need to know the social cost of carbon

This comes right out of the Econ 101 playbook.  To simplify, suppose there is just one fossil fuel whose use contributes to climate change.  Further suppose that the demand curve for this fuel represents the marginal benefit (MB) society gets from burning each unit, and the supply curve represents the marginal cost to society of supplying it—except for the climate externality.  Then we get the standard model: 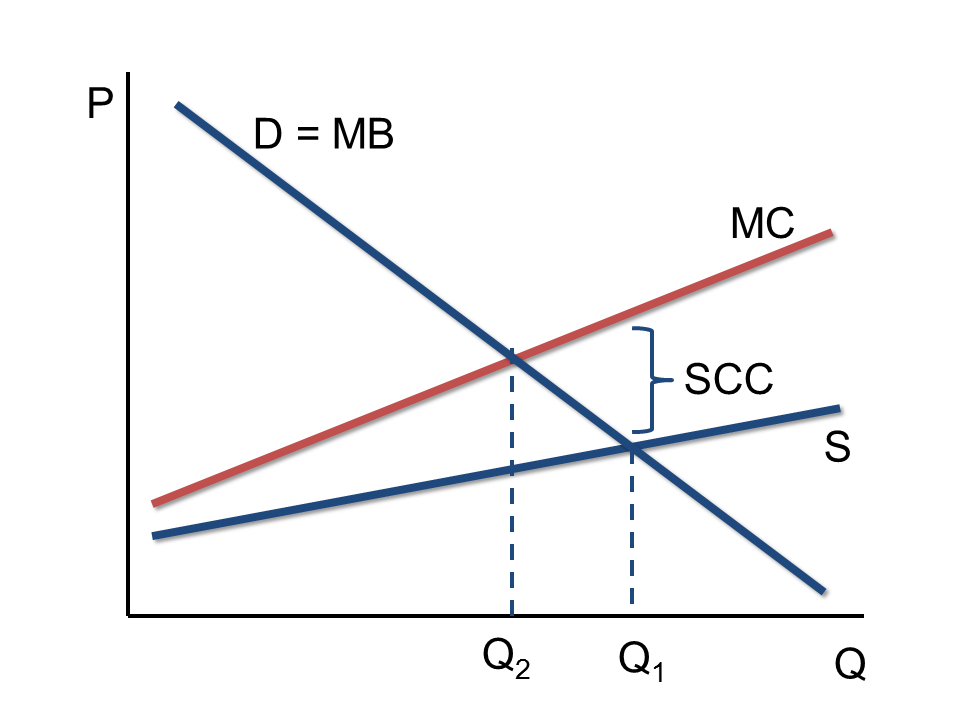 The social cost of carbon (SCC) is the difference between the full marginal cost of the fuel, MC, and its supply curve S.  (It changes as the quantity of fuel consumed changes.)  Economic efficiency requires that we set output where MC=MB, at Q2, rather than at Q1 where the market alone would put it.  There are two main ways we could do this.  One would be to charge a production tax equal to the SCC; this would cause producers to raise their price by the amount of the tax, so that MC becomes the new S.  The other would be to institute a carbon cap that limits fossil fuel production to Q2, which would lead to a higher price due to consumers’ willingness to pay at that quantity.  Both require that you know what the gap is between S and MC or, somewhat equivalently, between Q1 and Q2.  (I’ll get into the comparison between these two approaches in a later post.)

This explains why economists expend so much effort to estimate the social cost of carbon.  If you don’t know what it is, how can you possibly have a rational, efficient carbon policy?

For starters, an analysis like the one above makes a number of standard assumptions, some of which are probably close to the mark and others far from it.

1. It assumes that the market is competitive and governed by economic self-interest.  In fact, while there is quite a bit of competition in fossil fuel markets—even taking OPEC into account—most of the deposits are owned by governments, and those who set production policy are not necessarily the profit-maximizers you find in the textbooks.  In particular, governments tend to be myopic, concerned with generating revenue in the short run without much interest in the rate at which their resources are depleted.  For ample fuels, like coal and natural gas, that is probably not a big deal, but it’s a very big deal for petroleum.  Even without climate change, petroleum prices are probably too low, because the effects of depleting the available deposits are not fully taken into account.

2. It assumes that the amount people pay for fuels is a proper measure of the benefit they get, and the social benefit is just the sum of these individual ones.  That’s standard utility theory, but utility theory has little to no scientific standing.  Ask any psychologist, whose day job is to study human behavior and indicators of well-being, what he or she thinks of it.  One of my favorite examples of the failure of utility theory, by the way, is the evidence that, even considering the benefits of employment and residence opportunities, more commuting is associated with less well-being.  These unhappy commuters, of course, are consuming fossil fuels for this privilege.

3. It assumes that there are no interaction effects between people or the things they make or buy that influence their production or consumption choices.  In other words, it assumes that the choices they make separately are the same ones they’d make if they were able to consciously coordinate them.  When you consider just the interaction-dense nature of location and transportation decisions, this can’t be true.  If you thought the model above applied to both American and European commuters, for instance, you’d have to assume that Americans have a greater “preference” for (get more “utility” from) driving cars, while Europeans have a greater preference for taking trains.  (Or you could compare commuters in the LA and New York metropolitan areas: more or less the same thing.)  Maybe so.  But maybe the difference in transportation modes reflects a greater degree of coordinated choice in some places and less in others.

These are generic arguments that apply to all economic models that try to shoehorn social well-being into a supply and demand diagram.  What about carbon in particular?

Careful readers will have noticed that my introductory posts on climate science said almost nothing about the items economists focus on when they try to estimate the social cost of carbon.  I did mention sea level rise and storm intensity a bit, along with passing references to drought and forest fires.  There was no general discussion of the impacts on agriculture, however, or the comfort or discomfort of hotter weather, or effects on tropical diseases or temperate zone pest infestations.  If you spend your waking hours calculating the social cost of carbon, these are important components.

There are three reasons why I skipped these issues.  The first is that it is almost impossible to forecast these costs, not only because of the uncertainties of how climate change will play out, but also because of the potential for human activities to adapt.  Take agriculture for instance.  Most regions will be subject to stresses in the form of different distributions of degree days, precipitation and pests.  Farmers, of course, will not plant the same old, same old.  They will turn to new seeds, new crops and new production methods.  How successful will they be in surmounting the effects of climate change?  Hard to say.  Or take sea walls.  Economists put a price tag on sea level rise by comparing the cost of building a physical barrier to that of abandoning coastal infrastructure, which makes sense.  But the best they can do is estimate them on the basis of today’s technology.  If it begins to look like we will experience faster-rising seas than anticipated, maybe more effort will go into new materials or construction techniques that reduce the cost of protecting shoreline.  Maybe these efforts will bear fruit, and maybe not.  Costing out these economic impacts of climate change is a guessing game.

The second is that the economics of climate change is all about time.  With a decades-long lag between cause (burning fossil fuels) and effect, the numbers depend immensely on how you incorporate the time factor.  This is referred to as discounting, where the formula for the value today of some cost C anticipated N years from now is

Here PV is the present value and r is the annual rate of discount.  For instance, today’s level of climate change, which is the result of fossil fuel use over the past 200 years, has apparently destabilized the West Antarctic ice sheet, likely irreversibly.  Its effect on sea level will be felt as soon as about 200 years from now and as late as a thousand.  Let’s make the most favorable assumption (for costs) and assume that 200 years is the correct prediction.  Suppose that the 12-15 foot sea level increase will cost our descendants a trillion dollars to cope with.  Also suppose that an appropriate rate of discount is 3%, which is a measure of the value of putting off a given cost for a year.  (This is in the range of commonly used discount rates.)  Guess what?  That trillion 200 years in the future comes out to around $2.7 billion today.  Not as scary, is it?

In fact, there has been a raging debate among economists over how much, if anything, to discount future costs since the Stern Report of 2006.  He outraged many of his peers by choosing a discount rate of 1.4%, which is about as low as one could go.  If you read the debate that ensued you will find reasonable arguments on all sides; personally I don’t see a compelling case one way or the other.

But the larger question is whether this debate matters.  Indeed, why should it matter?  The reality is that almost any economic question of interest that far out into the future is completely beyond prediction, even probabilistically.  Moreover, the question about how much weight to give today to impacts we are creating for future generations is not an economic question, but an ethical and political one.  Think of it this way: suppose I say that there is a program that can eliminate a cost that will otherwise arise of $2.7 billion.  This number could mean different things.  It could mean, a bill will be presented to us this year for $2.7 billion and we’ll have to pay it then and there.  Or it could mean, a bill will be presented to our heirs 200 years from now and they will have to pay $1 trillion.  Question: is it immaterial for the policy question (whether to adopt the program) which of these is the actual case?  If you believe in discounting, the answer is yes.  My guess is that most people will see it differently.

The final point is the biggest—in fact it’s very big.  The main worry about climate change is not that it is going to add this or that amount of economic cost to some everyday human activity, but that the entire carbon cycle will spin out of control.  If human releases of fossil fuels heat the earth enough to trigger further releases of stored methane, the result could be beyond reckoning.  Remember those alligators in the arctic.  And if there is a tipping point we don’t know where it is.

From this perspective, programs to combat climate change are less like an investment with a rate of return (the social cost of carbon view) and more like insurance, an amount we should be willing to pay in order to rule out the risk of catastrophic harm.  Obviously we can’t insure ourselves against everything.  Some risks are too minute, and the cost of reducing their probability to zero is out of all proportion to the benefit.  Climate change isn’t like that.  The physics at a macro level are pretty well understood, and runaway feedback effects, while they might horrify, would not greatly surprise anyone who has studied the issue closely.

The bottom line is that, in trying to exactly calibrate carbon control costs to the economic impacts of climate change, economists have been chasing a chimera.  It’s the wrong framework for thinking about the problem and leads to cautious, myopic policy recommendations.  And a further tragedy is that, as we will see, there are truly urgent economic questions about climate policy and its impacts that almost no one is looking at.