Weitzman's Burden: do we dare to question economic growth?

Do we dare to question economic growth? asks Warwick Smith in a Comment is Free op-ed at the Guardian:


We live on a finite planet.

That’s it. How, you might wonder, can such a simple statement of obvious fact undermine the tenets of modern society?

According to Paul Krugman, though, "there’s a lot of room to reduce emissions without killing economic growth. If you think you've found a deep argument showing that this isn't possible, all you've done is get confused by your own word games."

O.K., let's play some serious "word games," then, and try not to get confused.

But let's start with another quote from Paul Krugman, "So what I end up with is basically Martin Weitzman’s argument: it’s the nonnegligible probability of utter disaster..." What the probability of utter disaster does in Weitzman's argument is render the standard cost-benefit analysis, based on a market-based discount rate, inoperative. What's a discount rate? It's an interest rate, or more specifically, according to Investopedia,


Our modern word 'interest' derives from the Medieval Latin interesse. The Oxford English Dictionary explains that interesse originally meant a penalty for the default on or late payment of an otherwise legitimate, nonusurious loan. As more sophisticated commercial and financial practices spread through Europe, fictitious late payments became an accepted if disingenuous way of circumventing usury laws. Over time, 'interest' became the generic term for all legitimate and accepted payments on loans.

A discount rate is an interest rate is a (formerly) usurious charge on a loan. Now, if I were to say next that "economic growth is another aspect of compound interest" or that "usury is what propels growth and what makes it imperative" an economist would insist that I am some kind of a crank. I won't say that.

I won't say it because what we're dealing with here are not economic growth and interest rates but accounts of economic growth and interest. These accounts are like pictures and here is where Wittgenstein can be of help. Paul Krugman, and EconoSpeak's own Peter Dorman, are fond of reminding us that critics of growth "mistakenly" identify GDP with "stuff." They point out that it is value, not stuff, that gets added up in the national income accounts. This is a bit like saying the duck-rabbit picture is a picture of a rabbit, not of a duck. 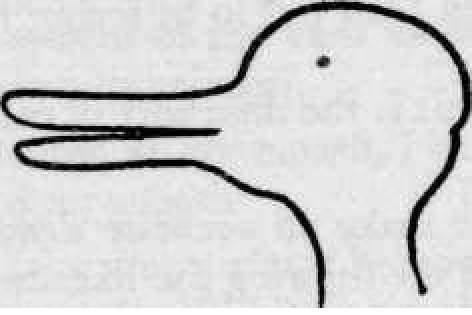 GDP certainly is not stuff. It is an account of something. And it is most definitely an account of something that many -- possibly most -- people perceive of as stuff. The question then arises whether the "value" that economists attribute to GDP would continue to carry the same weight if the people who formerly perceived of GDP as accounting for stuff stopped having that perception. This is another way to pose the question, "what is liquidity?"

What is liquidity? Clearly Keynes thought that liquidity-preference resulted from uncertainty and that changes in liquidity-preference are implicated in slumps to the extent that the rate of interest required to induce people to not hoard liquid assets exceeds the expected rate of return on productive investments. In other words, while GDP is indeed not stuff, whether it is perceived to be an account of stuff may well have a bearing on private investment decisions.

Furthermore, whether an individual investor does or does not believe that GDP is an account of stuff doesn't matter as much as what that investor believes is the average perception of investors. Keynes illustrated this condition with his beauty contest story.

In conclusion, Weitzman presented a compelling case for the inappropriateness of using market interest rates as a discount rate for cost-benefit analysis of policies for abatement of GHG emissions. There are no grounds for assuming that capital markets would react benignly to such policies, however prudent and appropriate they may be.