A World Without Work and the Image of Limited Good

Derek Thompson has a feature (slathered with Shell ads) at the Atlantic Monthly this month, once again traversing the well-trodden territory of the alleged Luddite/lump-of-labor fallacy (see also Foreign Affairs "Will Humans Go the Way of Horses"):


The end-of-work argument has often been dismissed as the “Luddite fallacy,” an allusion to the 19th-century British brutes who smashed textile-making machines at the dawn of the industrial revolution, fearing the machines would put hand-weavers out of work. 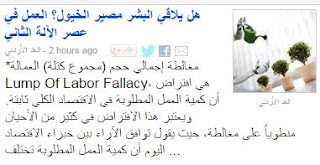 Thompson's take on the "boy who cried robot" fable is that this time -- perhaps, after so many false alarms -- the wolfish robot really is at the door. Overall, aside from referring to rioting 19th century laborers as "brutes," it's not such a bad survey of views on the issue -- citing Sandwich-pals, Robert Skidelsky, Ben Hunnicutt and Peter Frase, among others.

But Thompson's excursion takes a weird detour when he asserts that Skidelsky's, Hunnicutt's and Frase's vision of a post-work society is "problematic" because "it doesn’t resemble the world as it is currently experienced by most jobless people." WTF? Proposals for change are invalidated by their lack of conformity to the status quo? Night cannot follow day because it is dark and day is light? Different is impossible because it is not the same?

Thompson then devotes several paragraphs to rounding up the usual suspects of what might be termed as post-work work: 3-D printing, maker spaces and the internet enabled "sharing" economy of Ubers and Task Rabbits. After rambling on discursively for a few thousand more words, Thompson winds up back in Youngstown, Ohio, where his essay started, with the story of Howard Jesko, a 60-year old graduate student:


If Jesko had taken a job in the steel industry, he might be preparing for retirement today. Instead, that industry collapsed and then, years later, another recession struck. The outcome of this cumulative grief is that Howard Jesko is not retiring at 60. He’s getting his master’s degree to become a teacher. It took the loss of so many jobs to force him to pursue the work he always wanted to do.

And they all lived happily ever after! I suppose that's how you sell a story to the Atlantic Monthly.

Don't get me wrong. It's nice that Howard Jesko will get to pursue work he always wanted to do. I got to teach university at age 64 after working as a clerk in a grocery store for six years. My point though, is that Howard Jesko's happy ending is... not uh... statistically significant. I mean it is not even illustrative of any findings of any research, qualitative or quantitative. It is a weightless anecdote plucked out of thin air. Very thin air. A vacuum.

Besides, seeing all those Shell ads juxtaposed with the article kept depletion of cheap fossil fuel resources and climate change on my mind.

May I let you in on a secret? We're not hurtling inexorably toward a comedic denouement. That's fantasy. Wishful thinking. The Sandwichman offers abolition of the wages system and reduction of working time as harm reduction strategies, not as miracle cures. Got that? Harm reduction. Gonna be a world of hurt.

When the fossil interlude comes to an end, propping up the illusion of perpetual, exponentially-increasing prosperity won't be worth the bother. It will only annoy the pigs you are trying to teach to sing. It is not that there is "only so much work to go round." There are only so many cheap, readily-accessible material resources at hand to work with.  Working, it turns out is always working with.

Lionel Robbins famously defined economics as "the science which studies human behavior as a relationship between given ends and scarce means which have alternative uses." One may quarrel with Robbins's ghost about whether that is what economics ought to study but it must be admitted that the concept of scarcity plays a minor role in contemporary economics discourse. Scarcity has become a side-show that is presumably always solvable by substitution. There is even a "built-in mechanism" that makes it so! In truth, though, there is no built-in mechanism to substitute happy endings for the exhaustion scarce means. When the junk is gone, the party is over.

Ending? Yes. Happy? Not so much.

Back in the 1960s an anthropologist named George Foster studying the peasants of Tzintzuntzan, Mexico, wrote that those peasants had the foolish notion that there was only a limited amount of good in the world. If one person got more land or water or crop yield or conjugal bliss then somebody else would have to suffer with less. A zero-sum game. Foster thought this was an outmoded idea that had to be dispelled so people could enjoy the boundless booty of modern technology.

Foster's hypothesis was popular for a while in anthropology but also controversial. Eventually its prestige faded. In "Revisiting the Image of Limited Good: On Sustainability, Thermodynamics, and the Illusion of Creating Wealth," Paul Trawick and Alf Hornborg have revived the concept of the image of limited good but with a twist. The peasants were right and Foster was wrong.

In their essay, Trawick and Hornborg contrasted real wealth and virtual wealth, arguing that what grows are claims on real wealth generated by the expansion of credit. Meeting those claims necessarily involves the destruction of natural resources in the course of converting them into commodities with exchange value. An increase in exchange value thus always entails an increase in entropy -- that is, a decrease in available energy. The amount (or intensity) of this increase in entropy can be modified by technological efficiency improvements but its direction remains unchanged. "Real wealth, unlike its virtual counterpart, is something that human beings do not and cannot create in godlike fashion the way they create ideas and symbolic phenomena such as value."

This strikes at the heart what seems to be an unshakeable article of faith among economists. The economy can grow because value doesn't have to consist of stuff. Well, yeah, value isn't stuff. So what? The creation of value is the creation of claims that may be redeemed for stuff.

I give you a massage so I can buy a steak with the money you give me. The value of the service is only immaterial when viewed in isolation from my motivation for performing it. No beef, no rub. This is the distinction between real wealth and virtual wealth that economists seem incapable of grasping. Virtual wealth is indeed virtually immaterial -- until the claims that arise from that virtual wealth are redeemed. If those claims are not redeemable for real wealth, they are worthless.
Posted by Sandwichman at 7:21 PM

Brother Sandwichman,
I am looking forward to your visit. Your essay on scarcity was typical Sandwich meat: scholarly, entertaining, informative and persuasive. Write when you know your arrival time and transportation.

I'm so relieved you didn't say it was baloney, Jim! See you at the end of July.