For the Abolition of the Wages System!

Once more, with feeling:


Instead of the conservative motto: "A fair day's wage for a fair day's work!" they ought to inscribe on their banner the revolutionary watchword: "Abolition of the wages system!"

With that sentence Karl Marx concluded the second part of his address on the topic of wage-labor, prices and profit to the Central Council of the International Workingmen's Association. To the end of his exposition, Marx appended three proposed resolutions, the last of which proclaimed:


Trades Unions work well as centers of resistance against the encroachments of capital. They fail partially from an injudicious use of their power. They fail generally from limiting themselves to a guerilla war against the effects of the existing system, instead of simultaneously trying to change it, instead of using their organized forces as a lever for the final emancipation of the working class, that is to say, the ultimate abolition of the wages system.

In his address, Marx refuted the wages-fund doctrine of classical political economy, four years before John Stuart Mill famously recanted his defense of the doctrine in reply to William Thornton's critique. Three years later, the final nail was hammered into the coffin of classical political economy with the publication of Thomas Brassey's Work and Wages, whose conclusions Alfred Marshall predicted "will be found to exercise a very complicating influence on the theory of Distribution."

Before Mill recanted the wages-fund doctrine, it had been the chief "scientific" weapon for denying the legitimacy of trade unionism and the possibility of raising real wages through collective action. After Mill recanted the doctrine, the chief propaganda weapon against unions, higher wages and shorter hours became the claim that the unionists clung to a version of the discredited wages-fund doctrine. This supposed mistaken belief was eventually given the name of the Theory of the Lump of Labour.

June 27, 2015 is the one-hundred and fiftieth anniversary of Marx's call for the abolition of the wages system -- a fitting occasion for renewing that call:


We do not forget that we are fighting with effects, but not with the causes of those effects; that we are retarding the downward movement, but not changing its direction; that we are applying palliatives, not curing the malady. We shall not, therefore, be exclusively absorbed in these unavoidable guerilla fights incessantly springing up from the never ceasing encroachments of capital or changes of the market. We understand that, with all the miseries it imposes upon us, the present system simultaneously engenders the material conditions and the social forms necessary for an economical reconstruction of society. Instead of the conservative motto: "A fair day's wage for a fair day's work!" we inscribe on our banner the revolutionary watchword: "Abolition of the wages system!" 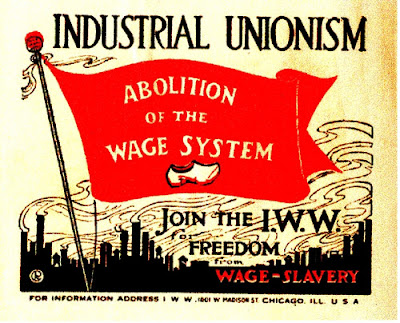 Posted by Sandwichman at 9:43 PM

The sabot on the bottom of the banner is a nice touch.

I'm lost, brother. How do you abolish the wages system by degrees?

"How do you abolish the wages system by degrees?"

That is indeed the 64 trillion dollar question that leads right into my thesis on how to abolish the wages system by degrees.

See "Szalámitaktika: How do you abolish the wages system by degrees?"