Evil EuRobot and Abolition Implosion of the Wages-Rut System

Another evil of the robot is the ill-will it begets between the masters and the workmen: their whole lives seem to be a constant effort, on the one hand, to see how much can be pressed out of the reluctant peasant; and, on the other, how little can be done to satisfy the terms of agreement, and escape punishment. Mutual injury becomes a mutual profit; suspicion and ill-will are the natural results. -- John Paget. Hungary and Transylvania: with remarks on their condition, social, political and economical, Volume 1, 1839.

The "robot" referred to in the preceding paragraph was not a mechanical man or other device but a system of labor rent that existed under serfdom in central Europe. 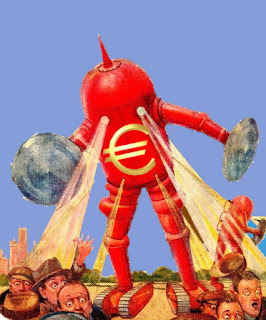 Etymology of robota (from Wikipedia):

Today, June 27, is the  150th anniversary of Karl Marx's declaration that workers "ought to inscribe on their banner the revolutionary watchword: 'Abolition of the wages system!'"

Sandwichman's effort to celebrate and revive this declaration has met with incomprehension in some quarters:


"How do you abolish the wages system by degrees?"

"And how would that work?"

"...there might be an interesting argument here, but I cannot understand what it is."

It is beginning to dawn on me that the euphemism "wages system" is a red herring that has been throwing people off the scent. Joan Robinson once famously wisecracked, "The misery of being exploited by capitalists is nothing compared to the misery of not being exploited at all."

Sadly, Robinson neglected to clarify that the latter kind of misery was a prerequisite for the former. This was something Karl Marx had described long ago as comprising the "great beauty of capitalist production" -- "that it not only constantly reproduces the wage-worker as wage-worker, but produces always, in proportion to the accumulation of capital, a relative surplus population of wage-workers."

It is as a consequence of this relative surplus of wage workers that "the law of supply and demand of labour is kept in the right rut, the oscillation of wages is penned within limits satisfactory to capitalist exploitation." Thus it would be more accurate to call the wages system of capitalism the "wages-rut system."

Originally, I had intended to post today an updated exposition of  the Labor Commons Union as a practical proposal for the abolition of the wages system. Previously I outlined the proposal in a book chapter, "Time on the Ledger: Social Accounting for the Good Society" and had elaborated on aspects of the idea in "Hours of Labour and the Problem of Social Cost" and "Labour Power as a Common Pool Resource."

But I find it increasingly difficult to motivate such an exposition. However dissatisfied people may be with the effects of the wages-rut system, there seems to be a singular lack of interest in doing anything about the causes of those effects or perhaps a conviction that nothing can be done. I'm not here to exhort people to "do something!" or to persuade them that there is a possibility of doing something.

Part of my disdain for such cheerleading has to do with what used to be known as "the conjuncture". Observing current events, I am afraid that it is too late to speak of abolishing the wages-rut system. Capitalist production is no longer "beautiful" enough to produce a surplus population adequate to the exponentially-expanding accumulation needs of finance capital. A deeper rut must be imposed by fiat by the central authorities. In essence, this is a return to the labor rent system of feudalism -- the robot. The "euthanasia of the rentier" has been overtaken by the erection of a monstrous life-support system for finance capital.
Posted by Sandwichman at 7:10 PM

And "how do you change it by degrees?" is exactly wrong. The mistake is instructive because it highlights the failure of the physics metaphor which dominates both Neoclassical economics and its Marxist critics.

Human society can only change by degrees. Darwin is your guide. Finches don't all at once change their beaks. Perhaps more importantly, no finch ever even thought about changing its beak. And yet there they were, every island a different beak.

"'how do you change it by degrees?' is exactly wrong.

"Human society can only change by degrees."

I took the question to imply that the change would be like a phase change, a revolution of the proletariat or some other such all at once event. "How?" as in "I don't see how..., because I only see to opposite."

That's a pretty standard interpretation, as far as the English language admits of such things.

That may be a standard interpretation of "revolution" or "revolutionary" but if you read the resolutions of the First International, drafted by Marx, you would have to come to the conclusion that either that is not his interpretation of revolution or that he contradicted himself fundamentally.

Although in the Eighteenth Brumaire Marx is explicit on the issue of the difference between the long-drawn out process and reversals of the revolution of the proletariat in contrast to the abruptness of the bourgeois revolutions.

One way or the other, it is still possible to embrace the objective of abolition of the wages-rut system without attaching any cataclysmic all at onceness to it. See the Szalamitaktika post and the Tragedy of the Wage-Rut System post for concrete suggestions.

I meant "valid and predictable" as opposed to "standard". Poor word choice on my part.

Are "valid" and "predictable" complements or substitutes?