A cartoon by Robert Mankoff came to mind as I read the introductory chapters of Gregory Zuckerman's 2013 book 'The Frackers' [image below].  It's a publication based on interviews with over 50 key players in the fracking industry.  "As recently as 2006" Zuckerman writes "business and government leaders fretted that America was running out of energy.  By 2013, however, the United States was producing seven and a half million barrels of crude oil each day, up from five million in 2005."  In 2012 America experienced its biggest fossil fuel production increase in the nation's history.

"The wildcatters, entrepreneurs, and hopeless dreamers who took a chance on drilling in shale and other challenging US rock formations have brought clear benefits to the country and possibly the world." Gregory Zuckerman concludes. But then he asks "How much damage have the pioneers created in their pursuit of oil and gas?"  "Less harm than the critics claim" ...but..."It may be years before the full consequences of the drilling and fracking are clear..."

Clearly Zuckerman's feelings have invaded his evaluation; in this case of the fossil fuel industry. Like many individuals the mass acquiescence and euphoria towards the fracking solution to 'peak oil' convinced them that they were right. 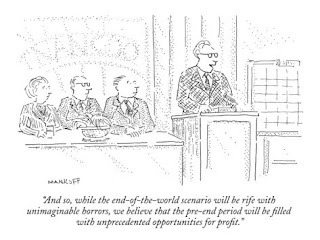 Posted by Myrtle Blackwood at 11:54 PM