Responding to an editorial in the New York Times, Jared Bernstein reprised a theme that Dean Baker has been stressing for a while -- that productivity and investment measures don't support the "robots are stealing jobs" story. I agree with Jared and Dean that it is policy, not robots that are stealing the jobs. But I am skeptical about using productivity numbers as evidence against the role of labor-saving technology in displacing people from employment.

The reason for my skepticism is that labor productivity is a ratio between two very broad aggregates -- GDP and hours worked -- that lump together a myriad of disparate economic factors. Here is the argument I made to Dean back in December. He was not persuaded:


The difficulty I have with the evidence you [Dean] use for your argument has to do with the changing composition of the aggregate measures that make up the productivity calculation and the possibility that confounding variables in each of those aggregates may be "compounding the confounding" when used for year-to-year comparison.

As Block and Burns pointed out, the National Research Project that developed the original productivity estimates argued that "no such thing exists in reality" as the productivity of a group of diverse products. Instead they presented two calculations of productivity, using different weighting, to show that the "measurement" depended in part on the weighting of the variables.

The shift from physical output to GDP measures obscured the fact that there is "no such thing" as the productivity of a diverse collection of products. Monetary value converts those diverse products into so much "leets" -- to use Joan Robinson's sarcastic term. Obviously the mix of goods and services that make up the GDP differs from year to year. The GDP deflator is intended to adjust for price changes and quality improvements but doesn't deal with distributional changes and product substitution.

The government services component of national income has been a particular issue, the critique of which goes back to Kuznets's 1947 criticism of the Commerce Department's GNP and Kaldor's statistical appendix to Wm. Beveridge's Full Employment in a Free Society. Kuznets argued that much of government services should be treated as intermediate goods rather than final consumption goods. Kaldor considered the inflationary affects of government deficit spending, arguing that some of that "inflation" simply reflected the increased share of collective consumption. Warsh and Minard offered a critique of "inflation" in the 1970s that could easily have referenced Kuznets'sand Kaldor's arguments. Their idea was basically that as government expenditure increases as a percentage of GDP, much of the taxation to pay for it is passed on to the consumer in the form of higher prices. It is an argument about the incidence of taxation.

Finally, there is the question of the "productivity" of hours of work themselves. Presumably there is an optimal length (or innumerable optimal lengths) of the working day, workweek or year and variation above or below that optimum will result in lower output per hour. Aggregate hours of work and average annual or weekly hours do not reflect changes in the dispersion of hours of work that may in turn be affecting the productivity of hours. Computationally, this injects a circular reference into the measurement of productivity. If you tried to do this on an Excel spreadsheet you would get an error message. It is only by ignoring the feedback effect of changes in hours and changes in dispersal of hours that productivity can be calculated as GDP/Hours.

When Jared posted his commentary, I wanted a quantitative illustration of the point I was trying to make. I had already been wondering about the question raised by Bill Gates about taxing robots and the idea that wealth creation might be "bypassing" income, so I looked up the net worth statistics.

After a bit of number crunching, I am astonished at what I see in the numbers. It is not just the discrepancy between GDP and net worth that impresses me but also the long period prior to 1996 during which the two numbers grew at a very similar rate. In the chart below, I have indexed both series to 100, with 1996 as the reference date. The smooth curve is actually two trend lines based on the 1947 to 1996 trend for each series: 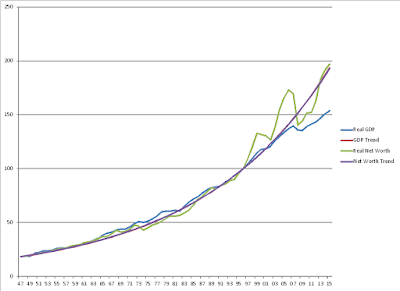 Logically speaking, and using the plain language meaning of the terms, wealth is something that is produced. So increases in wealth presumably are predicated on increases in production. It makes intuitive sense that over the long run there would some sort of stable relationship between the growth rates of GDP and of wealth. I was not anticipating, however, such a close fit between the two series from 1947 to 1996. It only accentuates the disjuncture between GDP growth and growth of Net Worth after 1996.

The above chart only goes to the end of 2015, so it doesn't include the recent stock market boom. Nevertheless, it presents an unsettling picture.

Returning to the puzzle of productivity, the point that I was trying to illustrate is that the comparability of the productivity measure requires a good deal of faith in the proportional stability of the economic relationships over time. If there are significant shifts in employment by sector, technology, resource availability, trade arrangements and/or consumption tastes, then comparing productivity between periods is futile. There is too much noise in the component aggregates to begin with -- but using a ratio between them amplifies the noise.
Posted by Sandwichman at 10:35 PM

We need to run these analytics using net worth aggregates that do not include the outlier 1 percent groups (where financial assets are concentrated).

We should also run the analytics excluding the FIRE sector from GDP values.

I am guessing the first suggestion would show the historic relationship of GDP and labor continuing. The second view would show even more troubling views of productivity, raising more questions.

Exactly. If increased productivity is found in one sector and increased employment is found in another low value-add sector (such as retail or food service), you won't see an increase in this measure of productivity. This explanation does generally appear to line up with the data.

Moreover, if much of the increased productivity is passed along to consumers in the way of lower prices, it is also not included in GDP and, again, you won't see an increase in this measure of productivity. This explanation also appears to generally line up with the data.

«"there is "no such thing" as the productivity of a diverse collection of products."»

«If increased productivity is found in one sector and increased employment is found in another low value-add sector (such as retail or food service), you won't see an increase in this measure of productivity.»

There is a striking example of the perils of looking at aggregate "productivity" in this example for the UK:

That was "productivity" as in barrels of oil per hour of oil extraction work. I suspect USA productivity has had the same boost from Alaska oil extraction, and from output from unrecorded illegal immigrants.

As to J Bernstein's points:

«"Obviously the mix of goods and services that make up the GDP differs from year to year. The GDP deflator is intended to adjust for price changes"»

The BEA and other "first world" GDP estimators practice diligently the "Gerschenkron effect" to boost reported GDP, after the USSR was accused of cheating for using it in the 1950s-1960s.

host.madison.com/ct/article_71fad514-9caa-11de-9a00-001cc4c03286.html
«Likewise, quality improvements - better cars rather than just more cars - account for much of the increase in GDP nowadays.»

globaleconomicanalysis.blogspot.co.uk/2005/05/grossly-distorted-procedures.html
«The most current figure I have for hedonic adjustment to the GDP is 2.257 TRILLION dollars which is roughly 22% of the GDP.»

Apparently the USA is the only country for which hedonic adjustments are applied to the reported GDP index to boost it.

«"Kuznets argued that much of government services"»

J Stiglitz also noticed the problem with them:

host.madison.com/ct/article_71fad514-9caa-11de-9a00-001cc4c03286.html
«For example, while GDP is supposed to measure the value of output of goods and services, in one key sector - government - we typically have no way of doing it, so we often measure the output simply by the inputs.
If government spends more - even if inefficiently - output goes up. In the last 60 years, the share of government output in GDP has increased from 21.4 percent to 38.6 percent in the U.S., from 27.6 percent to 52.7 percent in France, from 34.2 percent to 47.6 percent in the United Kingdom, and from 30.4 percent to 44 percent in Germany. So what was a relatively minor problem has now become a major one.»

«"should be treated as intermediate goods rather than final consumption goods."»

The current trend is for the BEA and other champions of an every bigger reported GDP to do the opposite: to reclassify intermediate goods and services as final output, where the cost of those intermediates has a bigger than average growth rate. Or to reclassify capital formation as consumption.
Nominal and real GDP are both index quantities, and cleverly "improving" their methodology to boost them results in lower debt-to-GDP ratios and boosts asset prices, all for next to no effort.
Every vote or market moving index gives rise to enormous incentives for "improving" it.

While I agree in general with your criticism of Mr Baker's uncritical use of BLS productivity and "robot productivity" as if they are synonymous, the story is far simpler than you are making it out to be. Lets use a pizza shop as an example. If the owner spends capital money and makes the line more efficient so that they can make twice as many pizzas per hour at peak, then physical productivity has improved. If the dining room sits empty because the tax burden was shifted from the wealthy to the poor, then the restaurant's BLS productivity has decreased. BLS productivity and physical productivity are simply unrelated in a right-wing country like the us. Also, I wouldn't worry about shifting tastes of the public. These are only presented as a straw dummy to distract from the much larger issue of shifting wallet sizes of the public.