Twenty-three and a half trillion, actually. But what's a few hundred billion? Here today, gone tomorrow, as they say.

At the beginning of 2007, net worth of households and non-profit organizations exceeded its 1947-1996 historical average, relative to GDP, by some $16 trillion. It took 24 months to wipe out eighty percent, or $13 trillion, of that colossal but ephemeral slush fund. In mid-2016, net worth stood at a multiple of 4.83 times GDP, compared with the multiple of 4.72 on the eve of the Great Unworthing. 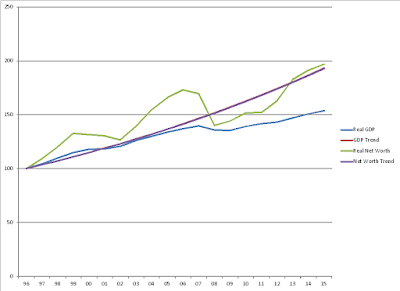 Somewhere between 20 and 30 TRILLION dollars of net worth will evaporate within the span of perhaps two years.

When will that happen? Who knows? There is one notable regularity in the data, though -- the one that screams "Ponzi!"

When the net worth bubble stops going up...

Growth slows, interest rates fall, asset values rise. If growth returns, values are supported despite rising rates on investment and expectations. If it doesn't, asset values stabilize or decline as assets are consumed. It would be difficult for the Fed to support them in a recession and if they didn't there would be problems.