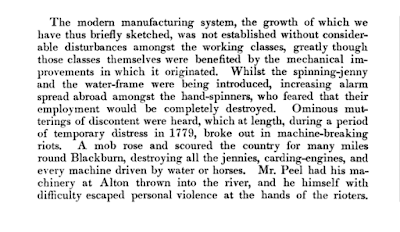 Dorning Rasbotham, a magistrate from near Bolton, Lancashire wrote a pamphlet in response to those 1779 riots, Thoughts on the Use of Machines in the Cotton Manufacture, that was to leave a lasting impression on polemical political economy. The pamphlet was signed "a Friend to the Poor." Although there has been some confusion the authorship of the pamphlet, a memorial plaque in the church where Rasbotham was buried described him as having "the characters of the poor man's friend." Squire Rasbotham strove to leave no doubt about where his sympathies laid:


I am, from the bottom of my heart, a Friend to the Poor. I wish to plead their cause, and to speak in their favour. I feel tenderly for the poor man and his family. And, if my heart does not deceive me, I would do, I would suffer any thing for their welfare. Led by no other principle, but regard to the Poor, I now wish to enter into free and friendly conversation with you, my poor but esteemed friends, on the subject of our machines.

Rasbotham's free and friendly conversation consisted of a series of assertions, many of which may strike the reader as condescending and several of which express notions that are repeated perennially as commonplaces in economic thought:
John Ramsey McCulloch, one of the more prolific, second-rank political economists of the early 19th century was effusive in his praise for the sensibility and soundness of Mr. Rasbotham's opinion, emphasizing the observation that "There is, in fact, no idea so groundless and absurd, as that which supposes that an increased facility of production can under any circumstances be injurious to the labourers." Rasbotham's own indictment of that "groundless and absurd" idea merits quotation in full if only because future economists echoed it incessantly for two centuries hence -- presumably without the faintest clue as to its origin:


There is, say they, a certain quantity of labour to be performed. This used to be performed by hands, without machines, or with very little help from them. But if now machines perform a larger share than before, suppose one fourth part, so many hands as are necessary to work that fourth part, will be thrown out of work, or suffer in their wages. The principle itself is false. There is not a precise limited quantity of labour, beyond which there is no demand. Trade is not hemmed in by great walls, beyond which it cannot go. By bringing our goods cheaper and better to market, we open new markets, we get new customers, we encrease the quantity of labour necessary to supply these, and thus we are encouraged to push on, in hope of still new advantages. A cheap market will always be full of customers. [emphasis in original]

Posted by Sandwichman at 1:51 AM