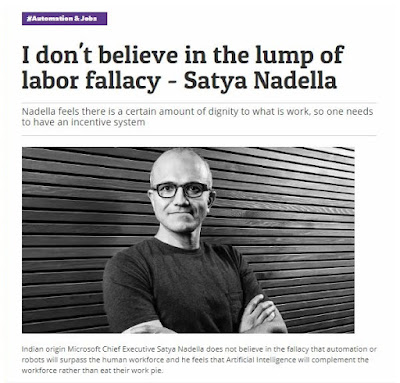 Nobody believes in the lump-of-labor fallacy. Mr. Nadella is engaging in a game of projection and disavowal that is as old as capitalism. He is affirming the reality of an event that only happens in the imagination -- the production of something out of nothing. To perform this usurious hat trick, one must assume something one knows is not true -- that money is fertile. The attribution of a bogus "fallacy" to others is a device for distracting attention from the deception involved in simultaneously fetishizing and disavowing the "productivity" of a mere formal claim to entitlement.
Posted by Sandwichman at 3:09 PM