Q: But the nude photographs were taken in New York City in 1995?

A: Correct. The photographs originally appeared in the French magazine Max and were published again in the New York Post last weekend. Marc Dolisi, chief editor of Max at the time, told The Washington Post that the pictures appeared in the February 1996 edition of the magazine and had been shot in November or December of 1995. Jarl Ale de Basseville, the photographer, said the shoot was conducted in New York.

Q: How can the discrepancy be explained?

A: Only Melania Trump can explain the discrepancy, which was first reported by Politico. The campaign has not responded to questions asking how those photos could be shot in 1995 if Melania Trump arrived in 1996.

Q: So does that mean Melania Trump was in the United States illegally in 1995?

A: It’s not clear. Dolisi and de Basseville both told The Washington Post that Melania Trump was not compensated for the Max magazine photo shoot. She was a relatively unknown model at the time. Taking part in magazine photo spreads for free is common for models at that level because the exposure can help them secure commercial work.

Q: Why is it important that Trump was not paid?

It is unclear, however, if she got any other kind of compensation during her 1995 stay, such as airfare and lodging.

This seems to be a fairly comprehensive account except for one detail.  Count Jarl Ale de Basseville or Alexandre de Basseville pleaded guilty in 2007 to conspiracy to commit money laundering and conspiracy to distribute MDMA ("Ecstasy") and was sentenced to 240 months in prison and ordered to forfeit $528,500. Not exactly what one would consider a credible reference regarding the legitimacy of one's visa status. 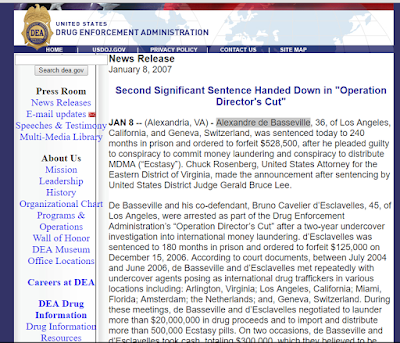 "Taking part in magazine photo spreads for free is common for models at that level because the exposure can help them secure commercial work." Can we get a second opinion on that?

Coincidentally, one of the prosecutors for the drug and money laundering case was named Trump -- James L. Trump:


DEA to Drug Ring with Hollywood Ties: "That's a Wrap"

Swiss and L.A.-based companies involved in drug and weapons trafficking

Seven arrests took place in the case, including those of Limelight Films, Inc. Chief Executive Officer Bruno D'Esclavelles of Los Angeles, Chief Financial Officer David Liberman, and three other associates. Also arrested was Alexandre De Basseville of Switzerland and Los Angeles. De Basseville is an executive board member of ADB Swiss S.A., a Swiss-based financial, business, and consulting service that owns the L.A.- based Limelight Films, Inc. Various media outlets have reported that De Basseville is engaged to Kiera Chaplin, granddaughter of the legendary film actor Charlie Chaplin. According to the Limelight Films, Inc. website Kiera Chaplin serves as an executive. De Basseville and D'Esclavelles were arrested in Arlington, Virginia and charged with conspiracy to distribute MDMA (ecstasy). Liberman was charged with conspiring to launder money.

"The men we arrested have laundered hundreds of thousands of dollars -- money used to further their drug and weapons trade to endanger our neighborhoods and bleed our communities," said DEA Administrator Karen P. Tandy. "This operation demonstrates once again the poisoning influence of drug money, and the greed that causes some people to hurt the lives of the many."

According to criminal complaints filed in federal court, Alexandre De Basseville met repeatedly with undercover agents over the past two years, posing as international drug traffickers. De Basseville offered to launder drug proceeds, supply weapons and broker ecstacy deals for the undercover agents. The agents met with De Basseville and several of his associates, including the other six individuals charged, in various locations, including Arlington, Virginia; Miami, Florida; Los Angeles, California; Amsterdam; the Netherlands; and Geneva, Switzerland. On two occasions, De Basseville and D'Esclavelles took cash, totaling $300,000, which they believed to be drug proceeds, and laundered it for the undercover agents using their Los Angeles business, Limelight Films, Inc.

Posted by Sandwichman at 1:39 AM