Over at the "George W. Bush Institute," Ike Brannon ("Growth Fellow" at the G.W.B. Institute and Director of Economic Policy and Congressional Relations at the American Action Forum) denounced, "Luddites, Lumps of Labor, and a Laundry List of Illogic" back in May.

As Brannon confessed, "The hackneyed trope of a lazy columnist is to take down someone else’s column, but alas, that is precisely what my column will do." Lazy columnist and hack that he is, Dr. Brannon didn't bother to actually know anything about the lump-of-labor fallacy claim he invoked.

Being even lazier that Dr. Brannon, I'm confident it is enough to mention that he is a "Growth Fellow at the George W. Bush Institute" to refute whatever the fucking moron might have to say. Sounds like a affectionate nickname for somebody's malignant tumor: "I went to the clinic the other day for a colonoscopy and was relieved they didn't find a 'growth fellow'."

Meanwhile, sometimes I stumble across recitations of the lump-of-labor catechism that I missed at the time. Here's one whose untimeliness has become timely again by the juxtaposition of the 2003 Bloomberg column to an advertisement for a current Bloomberg feature: "Lump-of-Labour Fallacy Gussied Up for a New Era" and "Flying Robots"! 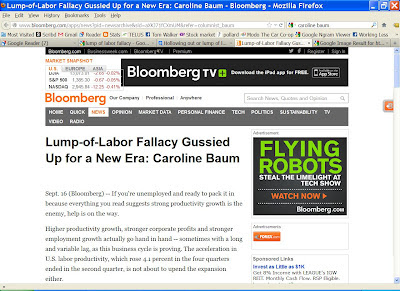 Ms. Baum bills herself on twitter as "a Bloomberg View columnist, writing about the macro-economy and the intersection beween [sic] politics and economics. My specialty is exposing economic nonsense." The unintentional ambiguity of the last claim is refreshingly frank. So I wrote to Madam Baum (and her editor):

Your twitter profile says that you write about the "intersection beween politics and economics." Obviously that should read "between." But that's not why I'm writing. Your profile also states that your "specialty is exposing economic nonsense." Way back in 2003 you wrote about the lump-of-labor fallacy being "gussied up for a new era." Well, here's an opportunity to expose some economic nonsense, provided you can admit being misled in the past.

A few years before Bloomberg published your column, my first article on the history of the fallacy claim was published by Routledge in an anthology edited by Lonnie Golden and Deb Figart, Working Time: International trends, theory and policy perspectives. Seven years later, the Review of Social Economy published my second academic article dealing with the history and substance of the fallacy claim. Since then I've continued archival research and have finally traced the claim down to a 1780 pamphlet by a Lancashire magistrate named Dorning Rasbotham. To make a long story short, the argument has always been a bait and switch, red herring, straw man argument. But to make that short story longer, it is fascinating to trace through history the imaginative and varied ad hoc "explanations" that expositors of the fallacy have appended to the ubiquitous but utterly fictional "belief in a fixed amount of work."

Anxieties about unemployment may be founded or unfounded but in either case they have nothing to do with an erroneous belief that the amount of work to be done is fixed in the long run. In fact, the fallacy claim (that is, the claim that the fallacy exists, not the alleged  fallacy) has been refuted repeatedly by economists -- to no avail. Many more economists have recited by rote the fallacy claim without once addressing or even acknowledging the challenges to the fallacy claim's authority.

Having watched my research on the history of the fallacy claim similarly ignored by economists and columnists alike, I have taken to building robot economist puppets of the worthies who recite the bogus claim as if it were gospel. My current rogues' gallery of robot economists includes Paul Samuelson, Paul Krugman, Richard Layard, Jonathan Portes, Lawrence Katz, David Autor, Ryan Avent, Matthew Bishop and Clive Crook (the last three being columnists for The Economist magazine). I've posted short videos of the puppets dancing and chanting their fallacy claims at http://ecologicalheadstand.blogspot.ca/2012/07/thoughts-and-dreams-about-machines-new.html

The challenge, of course, will now be to construct a Flying Robot Baum (reminds me of the flying monkeys from The Wizard of Oz). I suppose just replacing the arms with wings should do it.
Posted by Sandwichman at 1:12 AM