So Who Should Be Paying for Government Spending? 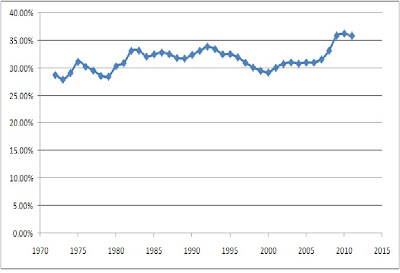 I omitted something from my frustration with the claim by Ari Fleischer the very well to do pay too much in taxes, which I hope our graph and a little more commentary addresses. The graph shows total government spending (Federal, state, and local) relative to GDP over the past 40 years (1972 to 2011). The fact that this ratio has been near 36% for the past three years is not a good indication of the share of income devoted to government spending for the future. In fact, this ratio dipped below 30% during the Carter years and the last two years of the Clinton Administration. But notice that the fiscal restraint we saw during these periods evaporated when Republicans were back in the White House. I thought it was Republican orthodoxy that we should eventually get around to a balanced budget, which would seem to suggest that total taxes – Federal, state, and local – would have to be around 30% of GDP. And yet Ari appears to content that the top 5% of the population has an effective Federal tax rate near 24%. OK – I know the rich do pay state and local taxes so I’m sure that their total tax bit is above 24% even in this world of regressive state and local tax burdens. Now it is true that Ari served a President who not only gave us tax “cuts” (more like deferrals in my opinion) as President Bush increased defense spending and bragged about giving us a prescription drug benefit. So maybe Ari – like others in the Bush White House – came to believe that money grows on trees. But in the real world, governments do face long-term budget constraints where deficits today equate to future tax liabilities. So if the rich are paying too much – as Ari claims – then the rest of us must be paying too little. So how high do the effective tax rates – inclusion of Federal, state, local, and deferred tax obligations – have to go for the rest of us?
Posted by ProGrowthLiberal at 12:16 PM

This issue doesn't really need a lot of complex measures of who earned what and what it all costs to keep it flying. One point only need be focused upon. A geo-political entity incurs significant costs maintaining itself in the world today. It's citizens must live in reasonable peace togather. They must be educated. We must all be protected from foreign incursion or the threat thereof. Roads, harbors, bridges, infrastucture, etc. It has its costs, but the returns, the benefits, to its citizens in well being and wealth in their pursuit of happiness are even greater than are those costs.

So who is it that benefits to the greatest degree? Who is it that needs the protections of its government more than others? Who is it that lives the best quality of life available within its sphere of influence? The wealthiest citizens benefit to a far greater, virtually immesurable, extent. So what's the beef? If you're earning $500,000 annually and more, what is the complaint? You're enjoying the fruits of the country's labors and efforts. Stop whining about the cost when you enjoy the sweetest fruits.