Carbon and Climate in the Very Long Run

Before taking up today’s topic, let’s begin with the ground rules.  Scientists like to be precise and comprehensive.  They want to get the details right.  For them, it’s important to know exactly how evidence was acquired and how reliable it is.  It’s also important to use scientific terminology, since the words embody the conceptual structures that define and contextualize them.

I’m not going to do science.  My goal is much more limited, to summarize the main themes as they relate to the nature of the carbon problem and possible solutions to it.  This wouldn’t be enough if we wanted to get concrete and quantitative—for instance, if we wanted to calculate potential impacts of various policies in parts per million (ppm) carbon concentrations or warming effects in fractions of a degree Celsius.  As you’ll see, the objectives this time around are much more limited.

With that behind us, let’s consider how carbon in the atmosphere, on land and water, and under the surface of the earth have interacted over the long haul.

The earth is about 4.5 billion years old.  (This would be a lot of birthdays if we knew what day it came into being.)  Picture the scene 8/9 of the way to the present, about 500 million years ago.  There was a lot of carbon in the atmosphere, about 25 times the level of 200 years ago, before humans started playing around with it.

This carbon has the now-famous greenhouse effect of refracting the sun’s light so that infrared radiation can’t bounce back off the earth as fully as it comes streaming in.  The result is that our atmosphere traps heat, and with so much more carbon the long ago earth was a much warmer place.  That was useful, however, since the sun was also a weaker energy-source back then, sending about 4% less our way compared to today.  Nevertheless, overall average temperatures were way higher than today.  (Even just 50 million years ago there were alligators in the arctic.)

It was at this time that complex forms of life began to appear on this planet.  What is life?  Life as we know it (a Trekkie-ism) is built on molecules whose core is made up of carbon bonded with hydrogen and oxygen.  The growth of organic matter depends on photosynthesis, which looks like this: 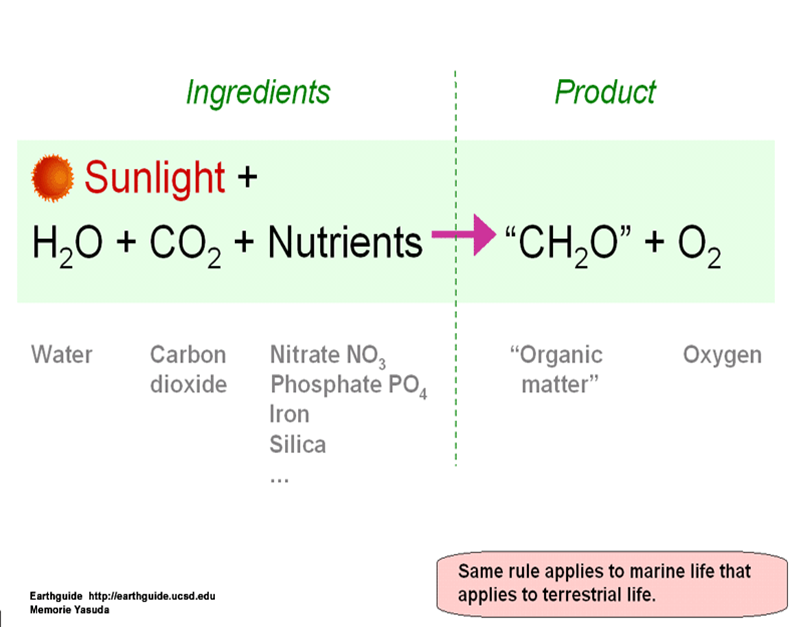 Through this process, carbon from the atmosphere makes its way into plant tissue and the tissue of organisms that feed on plants directly or indirectly, which is all of us.  Of course, where there’s life there’s death, and dead tissue decomposes, releasing its carbon.  The familiar smell of methane signals a gas (CH4) that returns organic carbon to the atmosphere.

So with the emergence of life, carbon starts to go back and forth between living organisms and the atmosphere.  In itself this should not alter atmospheric carbon concentration, except for one detail: every now and then, rather than releasing its carbon back into the environment, a decomposing organism will get buried in sediment, and sometimes these carbon-rich sediments get pushed down into the earth’s crust as tectonic plates do their bumping and grinding act.  (In addition, as we’ll see later, some of the methane created by decomposition gets smothered or frozen and doesn’t escape back to the atmosphere either.)

In short, most carbon cycles back and forth, but a tiny bit doesn’t: it gets sequestered.  Give this process a few hundred million years, and it can add up to something.  Here is the picture of atmospheric carbon in the very long run: 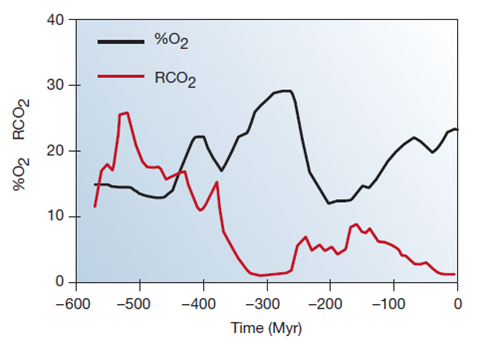 The red line is atmospheric carbon concentration as a multiple of its level 200 years ago.  The black line is the percentage of oxygen in the atmosphere, which has varied inversely, more or less, with carbon.  (Nitrogen makes up the rest.)  In case you're wondering, planet Earth today is at 2x baseline carbon, another 1 is probably baked in, and 4 or more is guaranteed unless we change course.  But I'm getting ahead.

To be sure, it’s not a simple, predictable downward trend, since there are lots of other factors at work, which we will gloss over.  The main point, however, is that, across the many ups and downs, the conversion of atmospheric carbon into living tissue and the sequestration of a portion of that tissue has had a systematic effect.  It’s given us an earth today that is quite different from the one multicell organisms encountered half a billion years ago.

So where did this carbon go?  Some of it can be found in carbon-based minerals, but most was either buried in the earth’s crust or in sequestered methane.  The pressurized underground stuff is what we call fossil fuels—coal, petroleum and natural gas.  These deposits were formed over millions, even hundreds of millions, of years, and the carbon they embody is what was once in the atmosphere when the world was younger and a whole lot hotter.

We’ll end this little review with our first takeaway: the problem of climate change stems from the exceptional cleverness of human beings, who have developed sophisticated methods to locate and extract fossil fuels.  These are fantastic energy sources, dense and versatile.  But in less than two centuries, humans have begun making noticeable progress toward undoing the last half-billion years of earth history.  As you might expect, that could have consequences.

Peter, thanks for doing this series.

You may be overlooking another important form of carbon sequestration, as humus in topsoil. There is an important difference in way carbon enters soil through decomposers or mycorrhizal fungi. The latter pathway is much more stable than the former. The chief advocate of this view is Christine Jones. www.amazingcarbon.com