In the Future, All Spell-Checkers Will Recognize Biogeochemical Cycling (Part II of Climate Science)

We haven’t done justice to carbon.  So far we’ve talked about it as a component of the atmosphere, the substance of living tissue and in sequestered deposits underwater or underground.  But carbon gets around a lot more than that.

The term you want to know is biogeochemical cycling.  This refers to the movement of carbon throughout terrestrial and marine ecosystems, propelled by the growth and decomposition of organisms, precipitation, chemical reactions and various other interesting processes.  Let’s begin with a picture: 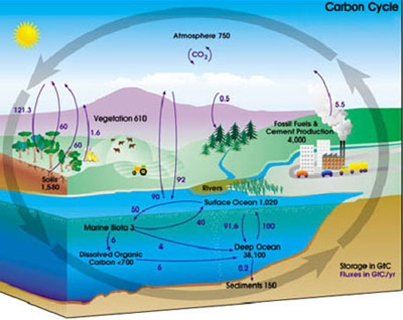 There are lots of carbon cycling graphics on the web, but this one is nice because it provides some numbers.  I can’t vouch for their precision, but the orders of magnitude are about right.

To talk knowledgeably about the carbon cycle we need a couple more terms.  Carbon sinks are the locations where carbon accumulates and decumulates; think of them like reservoirs in a water management system.  Carbon fluxes are the movements of carbon from one sink to another, with the analogy to pipes that transport water.  Sometimes people refer to the back and forth movement of carbon between sinks as carbon exchange.

So let’s take a look at all this fluxing.  Begin with atmospheric carbon.  Some of it is fixed through the process of photosynthesis into living tissue, where it shows up as either land or marine organisms.  If it’s on land, it can readily migrate into the soils; if it’s at sea it can become dissolved carbon or make its way to ocean sediments.  But carbon can also be exchanged directly between atmosphere and ocean in both directions.  Soils too, as they weather, can release carbon.

It’s important to recognize that carbon exchange is everywhere.  Here is where the water management analogy breaks down.  A water system has a fixed number of pipes; control them and you control everything.  The global carbon cycle moves through every surface and interface, in every gust of wind, drop of water, in every leaf—everywhere.  Human beings can influence it to some degree, for instance through land use policies, but only to a limited extent.  It is a massive, pervasive natural process that transcends us in every respect.  In fact, we ourselves, physically, are just tiny elements in that process, temporary carbon sinks that exchange constantly with the environment and are destined to release their carbon after death.

Does this sound benign?  There is a limit to how much carbon can be concentrated anywhere in the system, because fluxes will restore a degree of equilibrium.  If the carbon concentration in the atmosphere gets out in front of the carbon in the ocean, for instance, fluxes from air to sea will be greater than those in the opposite direction, and a new equilibrium will arise.  This is a force for stability.

Alas, there is another force that destabilizes this cycle—us.  Clever creatures that we are, our fossil fuel operations reintroduce carbon that had been kept out of the cycle for eons.  We mine or pump this stored carbon, and then it joins all the rest of the carbon in its many sinks and fluxes.  The critical moment is when carbon that had been excluded from the cycle is returned to it.  Once this happens, it simply increases the amount that cycles through the system: the sinks all get bigger carbon loads (if they can handle them), and the fluxes get bigger too.

This is one of the fundamental truths of the carbon cycle—one that many policy-makers and opinion-molders misunderstand—so it bears repeating: don’t blame the carbon cycle!  The problem is not that carbon moves from the plants to the soils, or the soils to the atmosphere, or the atmosphere to the ocean, or wherever.  It will do that.  The problem is that we’ve made the cycle bigger by adding additional carbon to it that had been locked out for millions of years.  Once we do this, our ability to steer it is limited in the short run and nearly zero in the long run.  As we’ll see, a lot of what people talk about in the realm of climate policy consists of exactly this misguided approach.

To sum up, today’s message is simple: carbon cycles through our world propelled by biological, geological and chemical forces.  It doesn’t like to sit still.  It is folly to try to control its movements.  If you want less carbon in the atmosphere, don’t try to prevent fluxes into it—stop adding to the amount of carbon that flows through the cycle.  Until we figure out a feasible way to withdraw carbon from its cycle completely, through artificial sequestration (and this is very iffy), keeping fossil fuels in the ground is what it’s all about.

Peter the problem here is that we seem to have three possible combined paths forward:

One: no sequestration and no limits on fossil fuel extraction. Result: we are effed (hey it is a family blog).

Two: valiant efforts at sequestration via geo-engineering combined with ineffective limits on fossil fuel extraction and usage. Result: a muggs game, the horses have left the barn on this one.

Three: effective efforts at sequestration plus replacement policies for fossil fuel extraction. Result: a thin sliver of light around those dark clouds.

Much of the resistance to sequestration, particularly to some of the more grandiose proposals for geo-engineering has it seems to me been driven by the belief that it just surrenders to outcome 2, or partial amelioration and so an excuse to do nothing on the 'abandon extraction' front. But it seems to me that if we could actually reach consensus on a no net new harm policy for existing human interactions with the carbon cycle that we could explore geo-engineering in a true remediation sense. To switch metaphors we have a narrow window to stop the bleeding which would allow us to rebuild the bone marrow. Except kind of in reverse because we want to extract carbon rather than injecting red blood cells. But still.

For example proposals have been made to spread iron compounds in current dead biological zones in the oceans to encourage carbon fixing organisms like plankton which in turn would allow increases in ascending populations of sea animals from krill to whales. As actual offsets to continued fossil fuel extraction and usage this is pie in the sky. But as a long term remediation project AFTER achieving some carbon extraction neutrality it seems to hold promise. The trick is to keep BP and the Koch Brothers from hijacking this would be remediation to cover for continued extraction. Which trick may be outside our powers. Still----

Bruce, as you'll soon see, I think the various attempts to game the carbon cycle by pumping up sinks (forests, soils, plankton) are highly dubious. At the very end of this series I'll suggest what I think the general contours of the policy package have to be, but for now I'm focused on debunking.