This is what was reported on June 8 as the "final result" of the California primary, with "100.0%" of precincts reporting: 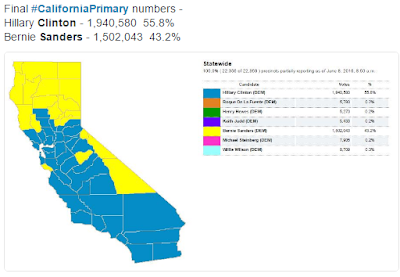 In other election news-- just to be clear -- the Federal Bureau of Investigation will not be recommending criminal charges against Secretary Clinton, announced FBI Director James B. Comey today in Washington, following an impromptu meeting last week between Attorney General Loretta Lynch and former President William Clinton. Director Comey stressed that the exoneration of Secretary Clinton should not be viewed as a precedent of leniency that might apply to anyone else:


To be clear, this is not to suggest that in similar circumstances, a person who engaged in this activity would face no consequences. To the contrary, those individuals are often subject to security or administrative sanctions. But that is not what we are deciding now.

Posted by Sandwichman at 1:16 AM

If my arithmetic is correct here even with these additional votes counted, Sanders got 2.36 million votes as compared to Clinton's 2.72 million. And the scandal was ???

We had some dust up here in Brooklyn as if my home were a banana republic. But everyone's vote was eventually counted. And the ultimate result was not changed at all.

Yeah, Bill was an idiot meeting with the AG, but this did not influence the Republican FBI Direcgtor, Comey. For a serious recommendation for her to be indicted to go forward there would have needed to be a finding of "gross negligence" on her part, which legally requires that there be a harmful outcome from the "extreme carelessness." No such outcome has been found. End of story, although the GOPsters will have House hearings to investigate this, now that they have run out of steam with their 8 House committee investigations of Benghazi.

If Hillary Clinton did anything wrong it was trivial compared to launching a war of aggression. Where was the U.S.A.'s Chilcot inquiry?

On election night I reviewed the incoming results on the Guardian's invaluable website which allowed County by County tracking. And it was clear by application of something I learned in 'Statistics for Humanities Majors' (i.e. not exactly 'mathy') that Bernie had not closed the deal in the most liberal Counties, and ones that had the most complete results early on. That is he lost big in Marin Country, in the City and Country of San Francisco, and in Alameda County, home to one of the most Bernie friendly (in principle) large universities in the country which is my alma mater of UC Berkeley.

On the other hand Bernie was crushing it in CONSERVATIVE rural counties. A pattern that had been established across the West. So I took a look at Counties where there were a lot of votes outstanding (like LA and Orange) and looked at the results that had been reported and in my head examined the possibility that early voting in the southern half of California might not mirror that of Northern California (where a lot of these votes were counted early) and for some reason be propelled by a pro-Bernie message that had not resonated in ultra liberal SF, Marin and Berkeley and concluded that the sample size of the recorded vote was such that it was impossible (using Statistics for Humanities Major methods) for Bernie to entirely close the gap. There seemed no way that the sample of early and provisional voters could be THAT much different than the sample of in person voters in Southern California to overcome the gap. Close it some sure, but overcome it?

Yet some folk, including people whose exposure to statistical methods was a little more advanced than mine, somehow convinced themselves that with 25% or so of votes not yet counted (early and provisional) that Bernie could somehow claim the 80% or so of them needed to close the election night 12 point gap.

Well that was not going to happen. And did not happen. In fact I am a little flabergasted that the ultimate margin actually closed from 12 to 8. Then again there were a shit ton (a technical statistical term) of votes still outstanding in California's most populous County and Bernie was running closer to Hilary in urban areas in the South than in the North. Still add it all up and the idea that somehow the fix was in and Bernie votes were being deliberately held back in the interests of CNN being able to call the state for HIl was and is statistical nonsense. No matter what HA.HA.HA. Goodman and friends were suggesting. The election night sample was 3.5 million votes. And while it wasn't technically random it still argued against a massive swing so far outside the margin of error.

As it was the 52 to 48 result for early and provisionals for Bernie as against Clinton is impressive. But it was never going to be the approx 80 to 20 needed. Because 'something, something, large numbers, something'. Even this Celticist understood that much.

I do stats too, Bruce, and with no more than a cursory glace through the maps on election night, it was also clear to me that Sanders was NOT going to win California.