The Road to Trumpdom

I always Google my headline ideas to try to avoid the appearance of plagiarism. I was thinking of the title for this post as I was looking at a cartoon adaptation of Hayek's The Road to Serfdom, originally published by Look magazine in 1945 and subsequently distributed in the 1950s as a pamphlet by the General Motors Corporation. As Ned O'Gorman explained,


"The Look version departed far enough from Hayek's original text that it hardly merited the same title. Nevertheless it did present the outlines of a popularized version of the neoliberal account of legitimation crisis that Hayek articulated."

Dick Meyer's very fine essay The road to Trumpdom: The backstory of the biggest character in politics takes its cue from a Hayek quotation,  "As is so often true, the nature of our civilization has been seen more clearly by its enemies than by most of its friends." Meyer traces the Republican dysfunction to the elevation of the primaries in American presidential politics, the reality TV show vulgarity and celebrity-adulation of American popular culture and ultimately to the long-term decline, since the 1960s, of Americans' trust in government.

Meyer's essay concludes with the decline in trust but doesn't elaborate on the reasons for it. Of course, this has been a well-worn topic, with contributions ranging from Jurgen Habermas's thesis of Legitimation Crisis to Michel Crozier. Samuel P Huntington and Joji Watanuki's diagnosis of an "excess of democracy."

My own view hearkens back to the nominal success of the O,E,C,D, growth target and its substantive failure. Under pressure from the U.S., the newly fledged institution adopted a target of 50% during the 1960s. Inadvertently, they exceeded this target by around 5%. I say "inadvertently" because when they adopted the target in 1961 they really had no idea what it meant. It just seemed like a good idea at the time.

In the meanwhile, all sorts of social, environmental, political and financial difficulties emerged that GNP growth was obviously not solving -- some of them growth was exacerbating. And then the decade of the 1970s failed to repeat the economic growth "success" of the 1960s. Economic growth, it turned out, was not the promised panacea. On the other hand, lack of economic growth just made things worse.

Here is were the cartoon version of The Road to Serfdom comes into its own. "The 'Planners' promise Utopia..." is the title of panel 3 "...but they can't agree on ONE Utopia" concludes panel 4. 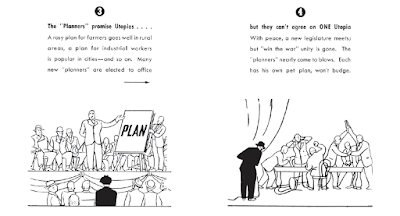 In the comic book Hayek, this lack of consensus immediately leads to an impasse that can only be resolved by a strongman. In real life, the lack of consensus about concrete Utopias was resolved by targeting economic growth. A rising tide would lift ALL boats. "Everybody will be happier that way," as Henry Wallich later reaffirmed, because:


Growth is a substitute for equality of income. So long as there is growth, there is hope, and that makes large income differentials tolerable. The environment will also be better taken care of if the economy grows. Nothing could cut more dangerously into the resources that must be devoted to the Great Cleanup than an attempt to limit resources available for consumption.

Well, growth has turned out not to be a "substitute for equality of income." Most growth for three or four decades has gone to those at the top and large income differentials have just gotten larger and larger and larger -- not more tolerable. The expanded resources have not been devoted to "the Great Cleanup" -- a not insignificant amount has been devoted to denying the necessity for any cleanup whatsoever. The environment is a hoax.

The latter view is understandable in that the "planners" have taken over the environment with much the same rhetoric that they invested in economic growth. "Green Growth" is predicated on exactly the same growth paradigm. Immigration enlarges the size of the pie -- there is not a fixed amount of work to be done, don't you know -- without doing much for the slice that goes to those who aren't at the top.

Which brings us to the nomination of Donald J. Trump. 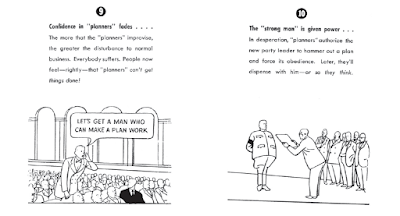 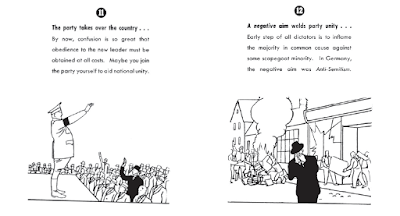 Posted by Sandwichman at 4:45 PM