"I love WikiLeaks," gushed serial sex pest Donald J. Trump at a campaign rally two weeks ago. Make no mistake, though, Mr. Trump does not approve of whistle-blowing. He only loves WikiLeaks so long as it operates as a Roger Stone dirty-tricks apparatus on behalf of his campaign.

The minute it turned against him, whatever it published would be election-rigging filth. He would sue the liars. He would jail the crooks. He would execute the traitors.

A case in point is the following selection of Trump's tweeting between June 2013 and May 2014 on Edward Snowden's revelations about ILLEGAL NSA spying on American citizens. 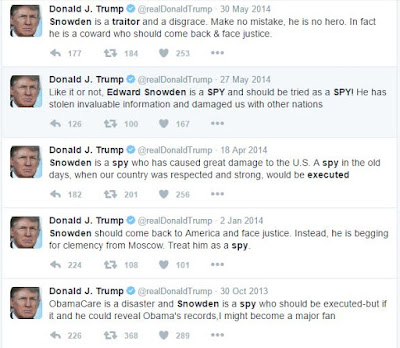 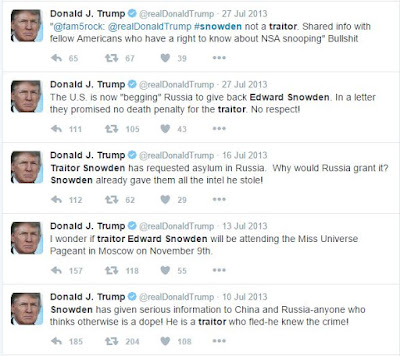 So what gives with WikiLeaks's one-sided campaign against Hillary Clinton -- and objectively in favor of Trump and the summary execution of Edward Snowden? Clinton and the Democratic National Committee attribute the hacking of Clintonista email accounts to "the highest levels of the Kremlin," a claim backed by an October 7th statement from the Director of National Intelligence, James R. Clapper.

Not so fast. This Clapper is the same Director of National Intelligence who on March 12, 2013, directly lied -- "allegedly" -- to Congress, under oath, about whether the NSA "wittingly" collected data on "millions or hundreds of millions of Americans." The inoperative word in Senator Wyden's question and subsequently in Clapper's answer was "collected," which, in NSA-speak, semantically means something other than collected. (Q & A at 6:00 on video.)
So what words in the DNI Election Security Statement must we beware of because they mean something other than what they mean? "Confident"? "Consistent with"? "Methods and motivations"? "Tactics and techniques"? "The Russians"?

Not to cast aspersions, but who else might have both the capability and motive to "interfere with the US election process"?

I mean who else besides the Russians or the U.S. Intelligence Community?

I didn't really know how to end this post, so I ended it in mid-thought with a question. But I've been thinking, wondering what the game would be if U.S. intelligence was the source of the hacked emails. A hypothesis occurred to me. It is only a hypothesis.

What if the NSA, CIA etc.wanted to discredit WikiLeaks and whistle blowers in general? What would be a smart way of doing it? How about a sting operation in which WikiLeaks itself promoted its allegiance to an unsavory, home-grown demagogue, Trump, on the one hand and a foreign adversary, Russia, on the other with Assange's deep antipathy toward Clinton being the blinders that prevented him from seeing the trap?

Posted by Sandwichman at 9:51 PM

Well that's a new one. Maybe a little too clever. I still vote Putin.

I watched Citizenfour the night before. In one of the outtakes, I think it was, Snowden tells about a CIA recruitment in Switzerland where the agent got the prospective asset drunk and then sent him home in his own car to get busted for drunk driving. The agent then was all apologetic and arranged to drive the prospective asset to work everyday and thus was the asset recruited.

With these guys you can't be too clever.

Besides, wouldn't publishing a DNI Election Security Statement, if it says is true, compromise the agencies' capacities for counter measures?

Thank goodness for WikiLeaks. I voted Obama based almost entirely on his promise of bringing some transparency to Washington. Having been 100% bamboozled by him on that promise I will now take transparency any way I can get it (although I would prefer it not be partisan).

Can we talk kerning?

The problem with your what if is Assange. What's killing, and likely to keep killing, Wikileaks is Assange talking. Even his complaint about having his internet access taken away was couched as if it was hacking from a foreign power instead of his hosts taking away his password. His recent Rickroll also placed him squarely in the Trump-type camp, which is not a place you want to put yourself if you hope to be taken at all seriously. Doing things like outing gay people in Saudi Arabia sure don't help either. I liked what he was doing, and what he wrote about why he was doing it, at first, but that has changed for me, and the reason is his own statements and actions. Not rumors or stories from others about what he's like, but his own words and actions,