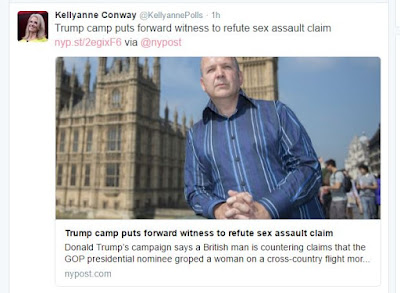 SIR Keith Joseph! Sir Rhodes Boyson! Sir Michael Havers! All senior Tories from the Thatcher era, and every one of them a paedophile – at least according to Anthony Gilberthorpe, billed as the “Tory child abuse whistleblower” by the Sunday Mirror, which has been running a string of sensational exclusives based on his allegations.

Other newspapers, especially the Daily Mail, have eagerly recycled the story. But none has taken the precaution of warning readers that Gilberthorpe – known to his few remaining friends as “Gilby” – is not the most reliable of witnesses.

In September 1987, for example, he announced his engagement in the Times to Miss Leah Bergdorf-Hunt, a fashion designer from California. The Gloucester Express reported the news on its front page under the headline “Gilby to Marry”. It quoted Gilberthorpe as saying: "Both our families are delighted… I hope this will explain to a few people about my recent visits to America.” But there was no engagement, and indeed no Miss Bergdorf-Hunt. As revealed in Eye 690, the whole thing was a fantasy.

In 1988 – the year before he claims to have sent Thatcher his dossier – he was awarded almost £50,000 libel damages against the Gloucester Citizen, Daily Mirror and Sun, all of which had reported that he was resigning as a councillor “amid allegations that he is a homosexual, has the killer disease Aids and has obtained £250,000 in cash and property from a disabled old-age pensioner”.

The odd feature of the case was that the local news-agency reporter who had supplied the story identified his source as Gilberthorpe himself. Mark Mitchell told the court that Gilby had phoned him from a London hotel to announce that he was quitting as a councillor because a national newspaper was about to allege that he’d had treatment for Aids at a New York clinic.

Gilberthorpe’s version was that he said he would return to Gloucester that day to answer allegations that he’d acquired £250,000 from a former patient of a nursing home he owned. It was Mitchell who mentioned Aids, asking if he had it – to which Gilby said no. This account was corroborated by his friend Piers Merchant, a Tory MP who had been in Gilberthorpe’s hotel bedroom when he rang the news agency and heard the conversation.

Gilberthorpe never collected his £50,000, however. The three newspapers appealed, and dug out new information which cast serious doubt on the Gilby-Merchant version of events. Gilberthorpe delayed and delayed, and eventually settled before the appeal came to court. The newspapers paid not a penny in damages and contributed only £5,000 to his legal costs – leaving him very much out of pocket and with egg all over his face.

And what of Piers Merchant MP, who had so gallantly testified for his chum? In 1997 he and his young mistress, Anna Cox, went to stay for the weekend with Gilberthorpe. Shortly afterwards they were amazed to see quotes from their pillow-talk and photos of them in bed splashed all over the Sunday Mirror. Gilby, it transpired, had fitted out the spare-room with hidden cameras and microphones and shopped his loyal friend to the tabloid for £25,000.

How much the Sunday Mirror has paid him this time is not known. He has no evidence to support his claims about Keith Joseph, Michael Havers et al – but at least they are all conveniently dead and in no fit state to sue. 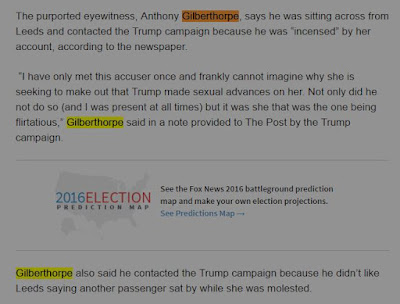 Posted by Sandwichman at 6:55 PM

Anthony has a credibility problem:

Funny. Fox News doesn't mention anything about Gilberthorpe's background. Perhaps they don't think it is relevant to his credibility.

Faux News and credibility are like a unicorn with a girl riding it.